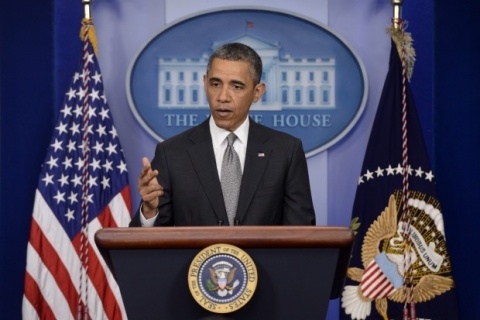 In a eulogy for late Ariel Sharon, US President Barack Obama spoke of a leader "who dedicated his life to the State of Israel." Photo EPA/BGNES

World leaders are paying tribute to late Israeli Prime Minister, Ariel Sharon, who passed away Saturday at the age of 85.

US President Barack Obama and First Lady Michelle Obama spoke of a leader "who dedicated his life to the State of Israel".

In a White House statement, Obama said: "On behalf of the American people, Michelle and I send our deepest condolences to the family of former Israeli Prime Minister Ariel Sharon and to the people of Israel." The statement reaffirmed "our unshakable commitment to Israel's security. We continue to strive for lasting peace and security for the people of Israel, including through our commitment to the goal of two states living side-by-side in peace and security."

"The State of Israel bows its head over the passing of former Prime Minister Ariel Sharon," Netanyahu said in a statement. "His memory will forever be held in the heart of the nation," added Netanyahu, who expressed "deep sorrow."

"Ariel Sharon was an Israeli patriot who rendered a great service to his country," German Chancellor Angela Merkel said. "With his brave decision to withdraw Israeli settlers from the Gaza Strip, he took a historic step towards reconciliation with the Palestinians and a two-state solution."

UK Prime Minister David Cameron said Israel had lost "one of the most significant figures" in its history while French President Francois Hollande said after a long military career Mr Sharon had "taken the choice to turn to dialogue with the Palestinians".

Russian President Vladimir Putin, noted that Sharon was respected at home and internationally and highly praised the late politician's personal qualities and his activities to protect Israel's interests

Canadian Prime Minister Stephen Harper called Sharon a "renowned military leader" who "pursued the security of Israel with unyielding determination that was recognized by friends and foes alike."

Ex-US President Bill Clinton and his wife Hillary Clinton, former US Secretary of State, said he "gave his life to Israel" and it was an honor to "work with him, argue with him and watch him always trying to find the right path for his beloved country."

"I will never forget meeting with this big bear of a man when he became Prime Minister as he sought to bend the course of history toward peace, even as it meant testing the patience of his own longtime supporters and the limits of his own, lifelong convictions in the process," US current Secretary of State, John Kerry, said in a statement.

United Nations Secretary-General Ban Ki-moon said he was "saddened" by the passing of the 85-year-old leader, who he said was "a hero to his people" throughout "a life dedicated to the State of Israel," both as a soldier and a statesman.

Former US envoy to the Middle East, Dennis Ross, pays tribute to Ariel Sharon, conceding that while he was a "controversial" political figure, Israel has "lost one of it's giants".