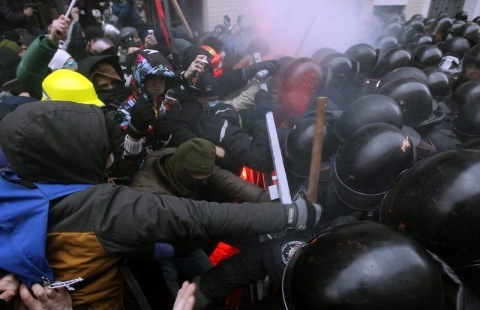 Archive photo from December protests in Kiev. Photo by EPA/BGNES

The crowd had gathered in front of a courthouse in Kiev, where a verdict was being given against members of a far right organization, the BBC reports.

The group was sentenced to 6 years in prison for plotting to blow up a statue of Lenin in 2011.

Following the verdict, an angered crowd began throwing rocks at the vehicles with policemen. The police responded with force, making a number of arrests.

It was revealed that one of those injured in the clashes was former Interior Minister Yuriy Lutsenko, who is now a leading opposition figure.

Ukraine has been marked by anti-government protests and occasional violence since November, when President Viktor Yanukovych backed out of a deal with the European Union, choosing instead to seek closer ties with Russia.

Far right groups have played an active role in the pro-EU demonstrations.