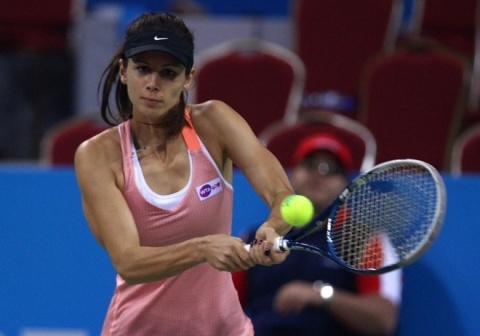 Pironkova, ranked 107th in the world, becomes the first ever player to win the tournament after having to go through the qualifying rounds.

In a dynamic first set, the two players broke each other's serve 4 times in the opening 7 games. At 5:4, Pironkova got her first set ball, but was denied by Kerber's precise drop shot. In her second chance though, the Bulgarian was unshakable and finished off the set with a strong return shot.

At 1:0 in the second set, Pironkova had 9 chances to break her opponent's serve, but failed to take any of them, in an epic game that lasted nearly 15 minutes. In her next receiving game however, the Bulgarian needed only 1 chance to break the German, taking a 3:1 lead.

Pironkova's form dropped significantly, and following a number of errors, allowed Kerber to turn the set around to 3:4. Another turnaround followed, leading to 5:4. With Kerber serving to remain in the match, the German's nerves didn't hold, and Pironkova took her first opportunity to win the match.