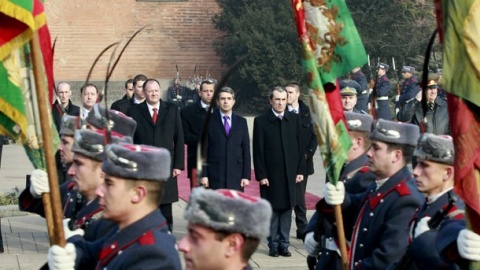 For the first time in several years a Bulgarian Patriarch led the ceremony for the consecrating of national colors on Epiphany.

Patriarch Neofit blessed with holy water the battle flags and sacred flags of the Bulgarian Army. The ceremony at the monument of the Unknown Soldier was attended by President, Rosen Plevneliev, Prime Minister, Plamen Oresharski, the Speaker of the Parliament, Mihail Mikov, Defense Minister, Angel Naydenov, lawmakers and diplomats.

The President and Commander in Chief of the Armed Forces greeted and accepted the guard of honor on "St. Alexander Nevski" square in downtown Sofia.

Neofit prayed for the unity of the nation and blessed the flags of the National Guard, the Military Academy "Georgi Sava Rakovski" and the military units in Bozhurishte, Gorna Malina, Musachevo and Sofia.

"Let our homeland be happy and glorious. Bless our nation to abide in peace, glory and prosperity, keep us away from our discord, disagreement and strife, so that we can stand united and strong and with your help fight off any enemy attack. May we all, the military and the secular power together and with one heart send a prayer to God to establish in the hearts of our country people peace, harmony and brotherly love" said he.

The ceremony ended with the laying of a wreath at the Monument of the Unknown Soldier and a solemn parade.

Epiphany is the only day of the year when Orthodox churches perform the Great Water Blessing.

Over his ailing health, late Patriarch Maxim last led the solemn ceremony in 2005. In recent years, it was headed by recently appointed Metropolitan of Varna and Veliki Preslav, Yoan, who was vicar of the Sofia Metropolitan.

On January 6, St. Jordan's Day (Epiphany), the day when Jesus was baptized in the river of Jordan by John the Baptist, the Bulgarian military units and colors are consecrated. The first solemn consecration of that kind was committed on August 19 917, the day before the decisive battle of Aheloy, when Bulgarian troops of Tsar Simeon the Great defeated the army of the Byzantine Empire. This ritual was followed from 1879 to 1946 without interruption. After the fall of the Communist regime, the tradition was resumed in 1993 and is conducted until present.