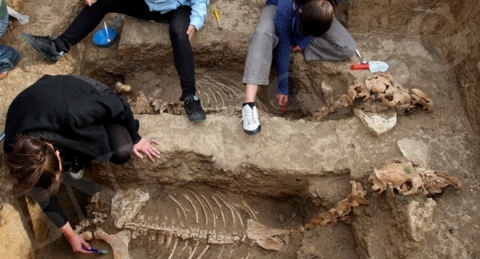 The skeletons of horses were found at Sveshtari in 2013.

The Japanese television channel TBS aired a coverage about Bulgaria's "Sboryanovo" archaeological reserve in its popular scientific series on Friday.

The coverage showed highlights of the 2013 excavations, led by Prof. Diana Gergova, with the help of archaeologists from the Bulgarian Academy of Sciences and foreign students from 8 countries.

TBS channel was one of the sponsors who helped finance the excavations at the Thracian mounds on the plateau near Sveshtari village in the Isperih municipality.

Sveshtari was the site at which a sensational discovery of a Thracian tomb was made 32 years ago. It is now included in UNESCO's World Heritage List.

With the help of the Japanese TV channel, archaeologists were able to find the remains of a Thracian chariot with the skeletons of two horses, believed to be part of a ritual burial as far as 2,500 years ago.

A golden treasure, dated around the same period was also discovered at the site in 2012.

TBS will show further excerpts of its film to the viewers over the next series of the show.