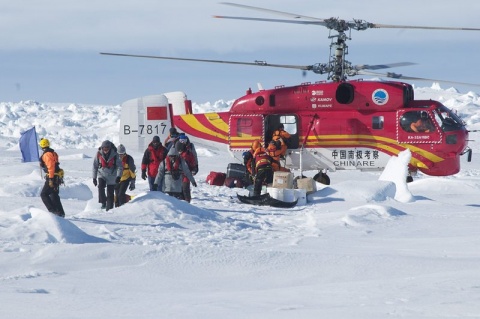 A supplied image obtained 03 January 2014 of a helicopter from the Chinese icebreaker, Xue Long, landing on a makeshift landing pad to rescue the stranded passengers from the Russian research ship, MV Akademik Shokalskiy. Photo by EPA/BGNES

The Chinese vessel involved in the dramatic rescue of the Russian ship Akademik Shokalskiy has also been stuck in the ice off the Antarctica coasts.

The crew of the Chinese icebreaker ship Xue Long (Snow Dragon) said Friday that they were worried about their own ship's ability to cut through ice.

The Aurora Australis vessel, which was carrying the rescued passengers, was told to stay in the area in case the Chinese icebreaker Snow Dragon needs help, according to the Australian Maritime Safety Authority's Rescue Coordination Centre, which oversaw the rescue.

The Snow Dragon, which is at the edge of the ice pack surrounding the Russian vessel, will attempt to push through the ice to open water on Saturday.

The Aurora is waiting 11 kilometers north of the Snow Dragon, said Lisa Martin, spokeswoman for the marine authority.

Currently there is no immediate danger to the Snow Dragon vessel.