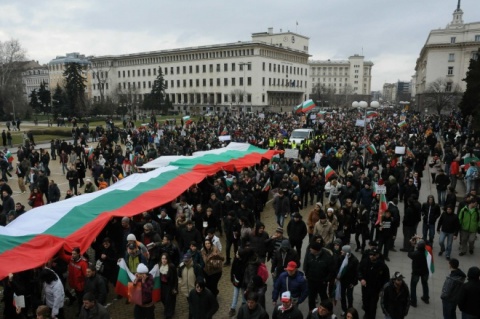 The protests against the Socialist-endorsed government in Bulgaria have been going on for over six months. Photo BGNES

Bulgarian antigovernment protesters are organizing themselves on social networks to stage a rally on "Alexander Battenberg" square on New Year's Eve.

The rally, demanding the resignation of the Socialist-endorsed government of Prime Minister, Plamen Oresharski, is to start at 11 pm on Tuesday, December 31, on the square where the capital Sofia traditionally holds a concert and festivities.

"What are your plans for New Year's Eve? Leave aside expensive tickets for skimpy dinners and drinks in various clubs, hotels, restaurants, and resorts; come to the square where each of you has been welcoming the New Year at least once," say the organizers.

They invite all in downtown Sofia, where the protests are usually held anyway, to join in their common desire to banish "this corrupt government and its puppeteers."

"Come outside with us; together we will be warm and cozy and have fun, because together we can do anything," the message, cited by the Focus news agency, further urges.

Organizers say the protesters plan to chant "resignation" during breaks of the musical performances of the concert on the square.

The protests against the government, which have been going on for over six months, started on June 14 in response to the scandalous appointment of media mogul Delyan Peevski as Chair of the State Agency for National Security (DANS).

The rallies continue, despite the fact that the number of protesters has decreased substantially.

In early October, students in a number of cities across Bulgaria started staging sit-ins at universities. The protesting students staged partial or full blockades at university buildings, demanding the resignation of the socialist-led coalition government, the dissolution of Parliament and early elections.