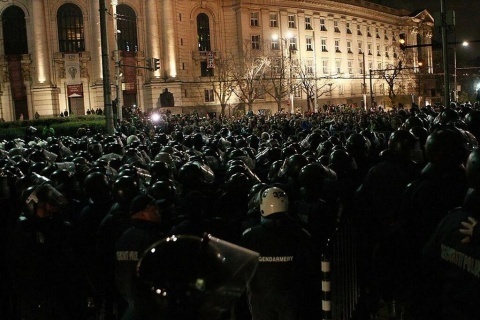 A Facebook photograph of riot police concentration in downtown Sofia in the evening of November 12 night when the antigovernment protest turned violent.

Bulgaria's anti-government demonstrators will get more radical after January 10.

The Facebook-organized event was created by one of the faces of the protests against PM Oresharski's Socialist-endorsed cabinet - Yavor Nikiforov, who was arrested in mid-November.

Nikiforov made an analogy between the current situation and the events in Bulgaria from January 1997 when the country fell into a deep political and financial crisis and people took the streets in protests. According to him, it was time that history repeated itself.

"We did not expect such an arrogant and thick-skinned government. From now on, it has become clear that we have to get inside the Parliament building, as people did in 1997. We must choose the least painful way to end this harmful period of Bulgarian history" Nikiforov said.