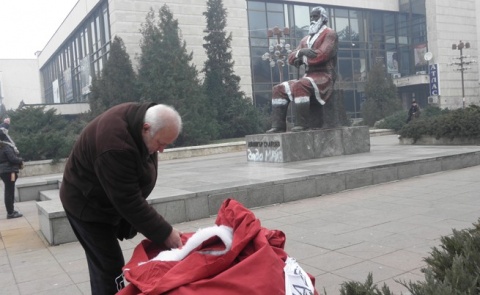 The Regional Prosecutor's Office in Blagoevgrad is yet to decide on launching pre-trial proceedings into the makeover of the monument of socialist politician Dimitar Blagoev.

The statue of Dimitar Blagoev was transformed overnight to represent the "socialist" version of Santa Claus. The monument was painted in red and white, with the name "Dyado Mraz" (the Bulgarian version of Russia's Ded Moroz – a character playing a role similar to that of Santa Claus) written underneath it.

Blagoev (1856-1924) is known as the founder of the first social democratic party in Bulgaria.

According to the press office of Bulgaria's Interior Ministry, the signal for the spray-painted monument was received at 9.15 am on Wednesday.

Three suspects were detained for 24 hours.

One of them, Kaloyan Handzhiyski, is a member of the right-wing party Democrats for Strong Bulgaria (DSB).

Police are working to establish whether Handzhiyski and two of his friends are responsible for the makeover.

CCTV camera footage shows the three arriving by car behind the Blagoevgrad Municipality building and heading for the monument.

Meanwhile, the monument is being cleaned under an ordinance of the Mayor of Blagoevgrad.

Atanas Kambitov, Mayor of Blagoevgrad, as well as MPs from center-right party GERB (Citizens for European Development of Bulgaria) and the Bulgarian Socialist Party (BSP), have condemned the makeover.