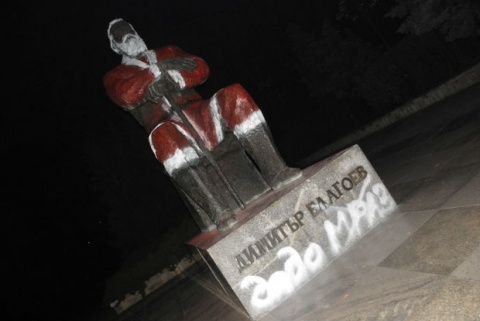 The statue of a socialist politician in the Bulgarian town of Blagoevgrad was transformed overnight Wednesday to represent the “socialist” version of Santa Claus.

The statue of Dimitar Blagoev was painted in red and white, with the name “Dyado Mraz” (the Bulgarian version of Russia’s Ded Moroz – a character playing a role similar to that of Santa Claus) written underneath it.

The transformation was presumably the work of street artists.

Blagoev (1856-1924) is known as the founder of the first social democratic party in Bulgaria.

Statues and monuments reminding of the totalitarian Communist regime (1944-1989) often undergo cheeky makeovers in the country.

In June 2011, activists painted the bronze figures of the controversial Soviet Army Monument in the capital Sofia to make them resemble characters like Superman, Ronald McDonald and Santa Claus, among others.