Major Fire on Southern Side of Bulgaria's Vitosha Mountain 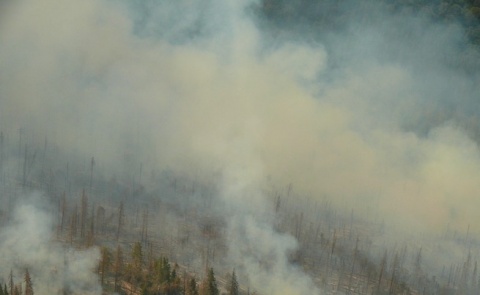 A wildfire is burning on the southern side of the Vitosha Mountain.

The fire is burning at around 1000 meters above sea level in the region of the villages of Studena, Kladnitsa, and Chuipetlovo, according to reports of the BGNES news agency.

The flames are visible from the section of main road E-79 near the village of Delyan.

The smoke column is around 1km high

Bulgaria's Interior Ministry told journalists that they had received a signal about the incident and they had dispatched teams to the site.

By 5 pm on Tuesday, a team of firefighters, 15 employees of the Vitosha state forest holding and 8 volunteers were fighting the flames, according to reports of the Interior.

The signal about the fire was received at 2.22 pm.

The firefighters found that dry grass and bushes were burning.

The authorities assured that there was no risk of the fire spreading to the nearby villages and buildings.