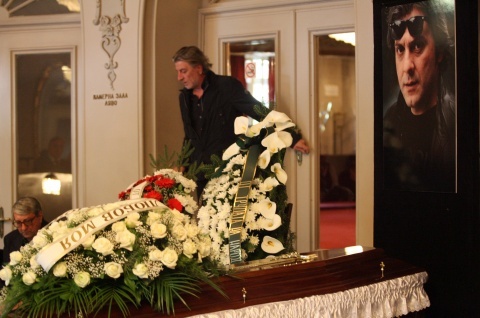 On May 5, on the eve of Easter, beloved Bulgarian theatre and film actor Petar Popyordanov, 48, died in Sofia’s Pirogov Hospital after an accident. Photo by BGNES

Prominent Bulgarian poet, writer, translator, and author of children's literature, Leda Mileva, passed away on February 5, her birthday, at the age of 93.

She graduated from the American College in Sofia and the Sofia University “St.Kliment Ohridski.”

Mileva is included in the Honorary List Hans Christian Andersen of the International Children's Book Council. She has published more than 30 books with children's poems.
Her poems and works have been translated and published in France, Germany, Russia, Belarus, Romania, the Czech Republic, Hungary, Syria and etc.

On February 15, one of the most beloved Bulgarian actors, comedians, and talk show hosts, Todor Kolev, died at the age of 73.

He graduated from the National Academy for Theater and Film Arts in Sofia in 1965. He worked at the theaters in Smolyan, Shumen, Plovdiv, and two theaters in Sofia.

Kolev had roles in over 30 Bulgarian movies, some of them emblematic for Bulgarian popular culture and cinema in the communist period.

On May 26, Bulgarian film director Ivanka Grybcheva died. She was born on July 28, 1946 in Sofia. She obtained a degree in Film and TV Directing from a Babelsberg-based university in 1966. She read lectures at the National Academy for Theater and Film Arts in Sofia and the St. Cyril and St. Methodius University of Veliko Tarnovo. She was the director of Children Are Playing Outside (Detsa igrayat van), Exams at any odd time, The Lot (Zhrebiyat), The Thirteenth Bride of the Prince , the TV series the Hedgehogs’war, One Calorie of Tenderness, etc.

Stoyan Ganev was born on July 23, 1955 in the Southern Bulgarian town of Pazardzhik.
A jurist by profession, he was one of the founders of the right-wing Union of Democratic Forces (UDF), a MP in the 1990 Grand National Assembly that prepared and adopted the democratic constitution of Bulgaria and a MP in the 36th Parliament.

Prof. Alexander Lilov, former leader of the Bulgarian Socialist Party (BSP), died on July 20 at the age of 79.

Lilov was born on 31 August 1933 in the village of Granichak, northwestern district of Vidin. He graduated Bulgarian Studies at Sofia University and in Aesthetics and Art Theory at the Academy of Public Sciences in Moscow.

Out of all Bulgarian politicians in the country’s recent history, Lilov served the longest as Member of Parliament.

On September 23, Bulgarian journalist Alis Kraycheva passed away from cancer at the age of 65 at the Military Medical Academy in Sofia.

A longtime journalist for the Bulgarian National Television (BNT), where she worked from 1981 until 2011, Kraycheva also held a job at Radio Sofia and worked as a model.  She was a reporter, author and host of fashion programs and morning broadcasts.

Eminent Bulgarian film director Rangel Valchanov died on September 30 at the age of 84 after prolonged illness.

In early 2012, he lost his voice after vocal cords surgery.

He obtained a degree in theater directing from the Krastyo Sarafov National Academy for Theater and Film Arts in 1953.

Academician Hristo Nedyalkov, the esteemed founder and head of the Children's Choir with the Bulgarian National Radio, died at the age of 81 on October 29.

Nedyalkov founded the Bulgarian National Radio Children’s Choir in 1960 – and was its conductor ever since.

During these 50 years, the choir went on 80 tours and gave over 2000 concerts in over 30 countries. Its repertoire included about 800 songs written by Bulgarian and foreign composers.

Nedyalkov was also a renowned composer and the author of over 400 works for children’s and women’s choirs.

He was bestowed with a number of prestigious international awards for his work over the years.

On October 20, theatre director Dimiter Gotscheff died at the age of 70 in Berlin following a brief severe illness.

Born on 26 April 1943 in Parvomei, Bulgaria, he went to the GDR in 1962 where he studied Veterinary Medicine and Theatre Sciences at Humboldt University in East Berlin.

In 1979 Dimiter Gotscheff left East Germany in connection with the expatriation of songwriter and dissident Wolf Biermann, and returned to Bulgaria. His 1983 production of Heiner Mueller’s “Philoctetes” in Sofia has been described as a revolutionary event.

From the mid-80s on, Gotscheff worked at a number of theatres in Germany and Austria.

He worked extensively on plays of dramatist Heiner Mueller. He received numerous awards, including the German Critics Award in 1991 and the 2005 Director of the Year award from critics surveyed by the journal Theater heute.