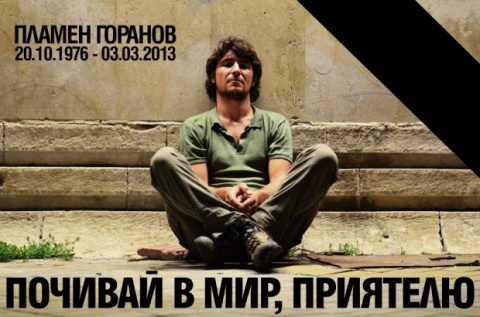 Plamen Goranov’s painful death and political gesture fueled talk of the "Bulgarian spring", like the ones in Tunisia and Egypt

The following feature by Milena Hristova was published at Novinite.com on March 27, 2013 – an eventful and sad month, in which Plamen Goranov died in hospital from severe burns and organ failure and Varna controversial mayor Kiril Yordanov quit under the immense public pressure.

With a simple flick of his wrist, his clothes – already doused in gas – got ablaze. In a second he was engulfed in a large fireball.

The bodyguard inside the municipality office in the sleepy Bulgarian town of Radnevo let out a yelp of horror, rushed to the man and frantically started to beat the flames out with his hands and shirt.

But the man was willfully going through a macabre slapstick routine, trying to numb the excruciating pain and surrender to the flames - running in helpless circles and screaming, each scream drawing fire, toxins and soot deeper into his lungs. The day before when the bailiff knocked on his door over the latest unpaid bills, Ventsislav Vassilev, 53, decided he had enough.

Out of work, penniless and living in a dilapidated municipal flat with mold on the walls and hardly any furniture he thought all he could do is borrow 3 levs (1.50 euros) – enough to buy a little more than a liter of gas.

With nearly 80% of heavy burns and almost no skin left on his charred body, heavy inhalation of soot and toxins, saving the man proved impossible.

On March 10, twelve days after the dramatic act, the father of five died, becoming the third men in just days to pass away after willingly surrendering to the flames. Ventsislav's public protest made headlines and touched a nerve with many Bulgarians bearing the burden of an economic and social catastrophe, which has engulfed the nation and is showing no signs of letting up.

When he set himself alight, the whole country was already on fire. Hundreds of thousands of Bulgarians hit the streets in protest against skyrocketing utility bills, poverty and mafia control, eventually toppling the government of Boyko Borisov.

Poverty, despair, lack of prospects and growing sense of helplessness has triggered an unprecedented spate of self-immolations in Bulgaria, the first for decades.

Within just five weeks the news of seven Bulgarian men setting themselves on fire shocked the nation. Four of the acts were fatal. The lives of three men are still hanging between life and death. The horrific new trend was set on February 19 by a 26-year-old jobless man, who poured a flammable liquid on his half naked body and set himself on fire in front of the local branch of a major bank to the utter horror of a few passers-by.

"I am sick of this fucking life!," Trayan Marechkov managed to utter before taking his last breath in hospital.

His self-immolation turned into the most striking image of a singular public act of protest in a country that's been plagued by poverty and plummeting living standards.

But just for a day.

Less than 24 hours later Bulgaria was jolted even more, when a 36-year-old artist, climber and environmentalist, set himself on fire in the center of Bulgaria's sea capital Varna, scene of the biggest rallies of anti-government protesters in recent months.

The days before his dramatic act Plamen was a regular demonstrator at the mass protests, sparked by excessive utility bills, but later morphing into political protests, forcing Varna mayor to resign.

The rallies were especially strong in the coastal Varna, where the local government is believed to be fully controlled by the local organized-crime-group-turned-business-corporation, known as TIM.

"Down with TIM!," Plamen Goranov chanted as he addressed one of the rallies, the 30 000-strong pulsating crowd taking up his call. While struggling with severe burns that had left healthy skin only on his feet the young man became known as Bulgaria's Jan Palach, the Prague student, whose death in flames sparked the hope of a whole nation back in 1969.

Just like Jan Palach, Plamen did not live to see his dream come true – he died in hospital from severe burns and organ failure on March 3, just two days before Varna controversial mayor Kiril Yordanov quit under the immense public pressure.

His painful death and political gesture fueled talk of the "Bulgarian spring", like the ones in Tunisia and Egypt where hundreds of people sacrificed their lives to overthrow the hated policies. The unprecedented series of self-immolations shocked the Balkan nation, but media coverage was scarce at the beginning.

Hristo Monov, a renowned Bulgarian psychologist, claims media is obliged to talk about those dramatic acts despite fears that those cruel public acts of protest could find more imitators.

"Media coverage is a must because these suicides provide a snapshot of the Bulgarian society – a society in crisis. It is no accident that the people who set themselves on fire within a few days are representatives of different generations," Monov says.

"More and more Bulgarians find themselves in desperate conditions, hardly able to survive by the end of the day," he adds, stoking fears the worse is yet to come.