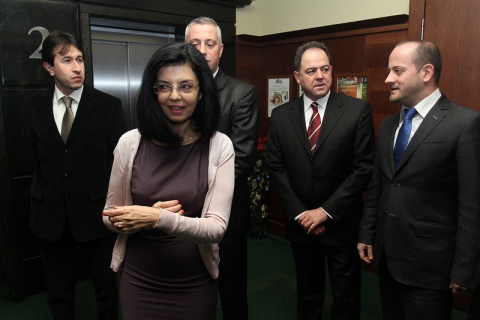 Five minor but influential Bulgarian rightists parties have laid down signatures formalizing the hitherto informal Reformist Bloc into a coalition.

The founding parties of the Bloc are Democrats for Strong Bulgaria (led by Radan Kanev), Bulgaria for Citizens (led by Meglena Kuneva), as well as the Union of Democratic Forces, the Freedom and Dignity People's Party (led by Kasim Dal), and the Bulgarian Agrarian People's Union.

The signing of the Reformist Bloc into a coalition comes against the backdrop of the latest spate of internal frictions among rightist politicians.

New rightist party Blue Unity, a Union of Democratic Forces spinoff much as Democrats for Strong Bulgaria, had announced they are likely not to join the formal coalition.

Analysts have named unresolved personal issues between representatives of the two parties as the reason.

In the fall, Bulgaria's Greens announced that they are quitting the Reformist Bloc over disagreement as to the Bloc's rightist political orientation.

The Bloc came together as a result of massive protests over the summer against Bulgaria's then new cabinet, led by PM Plamen Oresharski.

The stated purpose of the informal entity was to join in helping protesters bring down the government and rid Bulgaria of alleged corrupt, inefficient and leftist political practices.

The coalition agreement stipulates that the parties will run together in a full cycle of elections, which includes May European Elections, and the next parliamentary and municipal elections, the last ones being May 2013 and October 2011, respectively.

The agreement also creates a presiding body consisting of 6 representatives - one for each party and one from a so-called citizens' quota - as well as an executive board of 21 members.