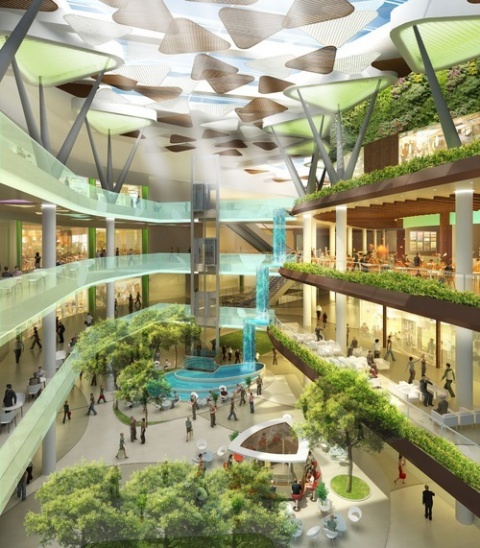 Paradise Center has been advertised as the first lifestyle mall in Bulgaria.

That is the key finding of a new report published by the commercial property company Colliers, entitled "The Dynamic of Dominant Shopping Centers."

The report described Warsaw, Budapest, Prague and Bratislava as the "traditional safe havens for investment" and their respective countries as "the driving forces of retail investment activity."

By 2012/13, however, Ukraine and Russia accounted for about twice as much retail investment activity as these former driving forces.

"The potential for growth into Russia and the Ukraine has become a significant interest to many major retailers," Colliers said in a statement.

Until around 2005, the Czech Republic, Slovakia, Poland and Hungary accounted for the overwhelming majority — more than 90 percent — of annual investment in major retail complexes in the wider Central and Eastern Europe region, figures published by Colliers indicate.

Within just two years, the picture had changed significantly, with Russia and Ukraine accounting for about 1.5 billion euros worth of retail investment activity, close to a quarter of the region's total.

There was a similar level of investment in Southeast Europe, which includes Romania, Bulgaria, Serbia and Croatia, during the same year, again up from almost nothing a few years earlier.

There was a tailing off everywhere in 2008/09 as a result of the global financial crisis, then a recovery before another heavy drop hit in 2010/11.

It is Russia and Ukraine that dominate the charts when it comes to shopping center space in the pipeline, with Moscow's "massive" total of 1.16 million square meters more than 10 times the figure for the whole of Central Europe, where just 110,800 square meters of new space is planned.

"Moscow appears unsaturated and the scope for further expansion remains high," the report said, with a "well below average" figure of 243 square meters per person at present.

"All the traditional [Central European] markets of Warsaw, Prague, Bratislava and Budapest seem relatively full — although there is capacity for some niche developments and extension or remodeling of existing projects — whereby any new schemes entering the market are likely to cannibalize other existing centers, or simply struggle to succeed," said the report.

Growth in online retailing is another factor likely to increase competition for physical shopping centers in these markets.

Bulgaria ranked first in the European Union in the number of new shopping malls in the first half of the 2010, but now the number of malls is on the slide.

Most malls and shopping developments are clustered in Bulgaria's capital Sofia and the process of mallification continues unabated in its southern districts.

Bulgaria Mall, Paradise Center and Sofia Ring Mall, which is yet to be opened, dominate the new retail supply in the Sofia, cumulatively, delivering to the market in Sofia approximately 180,000 sq. m.

The opening of furniture giant IKEA, which took place in September 2011, stimulated the competition in this segment, being a major determining factor for the price and product policy of many operators on the market.