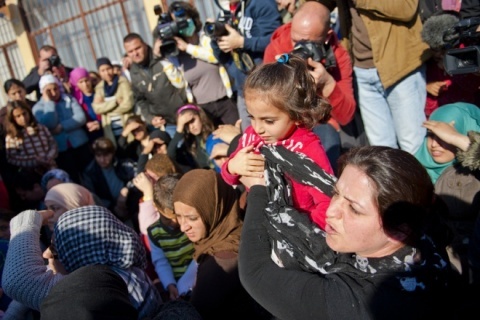 SVILENGRAD, Bulgaria — After spreading turmoil and desperate refugees across the Middle East, Syria's brutal civil war has now leaked misery into Europe's eastern fringe — and put a spring in the step of Angel Bozhinov, a nationalist activist in this Bulgarian border town next to Turkey.

The local leader of Ataka, a pugnacious, far-right party, Mr. Bozhinov lost his seat in the town council at the last municipal elections in 2011 but now sees his fortunes rising thanks to public alarm over an influx of Syrian refugees across the nearby frontier.

Membership of the local branch of Ataka, he said, had surged in recent weeks as “people come up to me in the street and tell me that our party was right.” Ataka, which means attack, champions “Bulgaria for Bulgarians” and has denounced Syrian refugees as terrorists whom Bulgaria, the European Union’s poorest nation, must expel. An Ataka member of Parliament has reviled them as “terrible, despicable primates.”

With populist, anti-immigrant parties gathering momentum across much of Europe, Ataka stands out as a particularly shrill and, its critics say, sinister political force — an example of how easily opportunistic groups can stoke public fears while improving their own fortunes.

The influx of Syrian refugees has sown divisions across the European Union as the refugees add burdens on governments still struggling to emerge from years of recession. But Bulgaria is perhaps the most fragile of all the European Union’s 28 members. Modest as the numbers of refugees are here, the entry of nearly 6,500 Syrians this year has overwhelmed the deeply unpopular coalition government and added a volatile element to the nation’s already unstable politics.

The arrival of the refugees and public fury over the stabbing of a young Bulgarian woman by an Algerian asylum seeker “has opened the floodgates” for far-right nationalists, said Daniel Smilov of the Center for Liberal Strategies, a policy research group in Sofia, the capital. “They see this as their big chance.”

No matter how inflammatory its message or small its numbers, Ataka has had outsize leverage since inconclusive parliamentary elections in May left it critical to the survival of Bulgaria’s new socialist-led government, which has been besieged for months by protesters demanding its resignation over complaints of cronyism and corruption.

Ataka’s denunciations of foreigners and local minorities like the Roma, or Gypsies, along with its demands for the return of “lost” Bulgarian territory, have pushed it to the forefront of a chauvinistic, nationalist trend gaining ground in several former Communist countries of Eastern and Central Europe.

Like many populist parties in Western Europe, Ataka mixes right-wing calls for law and order and restrictions on immigration with economic policies that veer sharply to the left. But more than nationalist groups in richer countries to the West, Ataka is “virulently racist and anti-Semitic,” said Krassimir Kanev, head of the Bulgarian Helsinki Committee, an advocacy group working to improve the often dire conditions in government-run camps now housing the refugees.

The party was more comparable to the neo-fascist Golden Dawn movement in Greece, he said, but conceded, “Ataka’s strategy works.” Yet while Greece’s government has cracked down on Golden Dawn, in Bulgaria, Ataka is in effect a government ally. “They have made the political debate harsher and harsher,” Mr. Kanev added, as Ataka and like-minded parties have defied predictions that xenophobic extremism would fade away as Europe’s poorer nations, particularly former Communist ones, became integrated into the European Union.

Hungary’s far-right Jobbik, the third-biggest party in Parliament, stirred outrage in early November when it unveiled a statue in Budapest of a Nazi collaborator, Miklos Horthy, the country’s fascist leader during World War II. Later in November, in neighboring Slovakia, Marian Kotleba, a fiery nationalist notorious for incendiary comments about the Roma, won election as a regional governor.

Over the years, Ataka has allied itself with mainstream parties on both the right and the left, and even with an ethnic Turkish party that it previously wanted banned.

Though Ataka won only about 7 percent of the vote and 23 seats in Bulgaria's 240-member Parliament in the May election, this political shape-shifting has helped make it a kingmaker in the finely balanced assembly. It has used its ever-changing alliances to push through Parliament a ban on land sales to foreigners, in violation of Bulgaria's commitments to the European Union, and also to prod the authorities to start building a high fence along part of the border with Turkey to keep out the Syrians.

Despite its apparent opportunism, Ataka's one constant has been its vicious rhetoric against foreigners and minorities. Alfa Television, a station operated by Ataka, denounces the refugees as radical Islamists and scroungers who will only bring violence and deeper poverty to Bulgaria.

Speaking recently on Alfa, which calls itself the "television of truth," Magdelena Tasheva, an Ataka member of Parliament, said, "They are not refugees; they are terrorists." She has also called them "savages," "scum," and "mass murderers." She compared them to monkeys.

Alarmed that Ataka's rhetoric is stoking sometimes violent xenophobia, a group of longtime Syrian residents of Sofia recently filed a formal complaint against Ms. Tasheva with the country's Discrimination Protection Commission, which said it was examining the matter. Ms. Tasheva declined to be interviewed.

Mohammad Albramawi, a Syrian computer expert who emigrated to Bulgaria years ago and helped initiate the complaint, said he had received threatening telephone calls and was so intimidated that he had stopped speaking Arabic outside his home. "I have lived in Bulgaria for all these years," he said, "and now I am frightened for the first time."

Ibrahim Ragheb, a 40-year-old father of six who fled Syria two months ago with 21 relatives, said the family planned to get to Germany but is now stranded in a holding center in a filthy school in a Sofia industrial zone. Mocking Ataka's claims that refugees are all terrorists, he pointed to his 3-month-old granddaughter rolled in a blanket. "Does she look like Osama bin Laden?" he asked.

Mr. Bozhinov, the Ataka leader in Svilengrad, said he had nothing against legal immigrants. But he fumed against those who sneaked across the thinly guarded border from Turkey, seeing them as a threat to Bulgaria's and Europe's security and economic well-being. They should be either sent back or moved on to richer countries willing and better equipped to take them, he said.

"We are not a party of xenophobes," he said. "But Bulgaria has lots of poor people of its own that need taking care of before refugees."

Syrian refugees, many of whom passed into Bulgaria after paying at least 0 each to people smugglers in Istanbul, say they have no desire to stay here, but European Union rules require that they seek asylum in the country where they are first registered and fingerprinted.

The refugees, who mostly dreamed of getting to Germany or Sweden, say they never expected Europe to be like this. "This country is too poor," complained Mohammed Hussein, a 24-year-old Syrian who has spent the last six weeks confined to a former military base at Harmanli, a desolate town near Svilengrad. "It is like living in a prison," he said.

Nikolai Tchirpanliev, a retired army colonel recently appointed to head the state agency charged with taking care of the refugees, said that the Syrians had helped wear out their welcome by complaining too much about stinking, clogged toilets and other problems in the camps and holding centers.

"It is like when the Huns came to Europe," he said, comparing the influx of Syrians to the wild, nomadic warriors who conquered much of Eastern Europe in the fourth and fifth centuries. Amnesty International and other groups that criticize conditions, he said, should stop condemning the Bulgarian authorities and "ask, 'Why don't these people know how to use toilets?' "