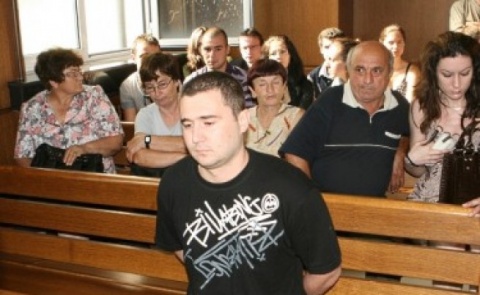 The District Prosecutor's Office in Plovdiv has issued a European Arrest Warrant against Iliyan Todorov, a Bulgarian, sentenced to life imprisonment in a double murder case.

Following an acquittal by the Sofia City Court in end-2011, the Sofia Appellate Court sentenced Iliyan Todorov to life imprisonment in a double murder case in April, 2013. The young man was found guilty of the murder of 21-year-old Kiril Vazharov and 24-year-old Vasil Alexandrov in front of the Solo club in downtown Sofia on April 18, 2009.

The fatal stabbing came after the boys allegedly got involved in a fight between two groups of drunken young people in front of the club and were stabbed in the back while trying to get away from the fight.

On December 4, Bulgaria's Supreme Court of Cassation (VKS) upheld the life sentence but it turned out that the authorities could not find Todorov.

Todorov recently published a video on Youtube in which he claimed that he was innocent and the actual murderer was walking free.

The District Prosecutor's Office declared a nationwide search for Todorov a few days ago as it turned out that two years ago he had registered at a Plovdiv-based address.

On December 11, Iliyan Angelov, Bulgaria's Deputy Justice Minister, assured that the authorities involved in the search and the enforcement of the life sentence of Todorov were doing everything possible to find him and make sure he served his sentence.

On Friday, Justice Minister Zinaida Zlatanova assured that the Chief Directorate "Security"of the Justice Ministry had taken all possible steps to track him down and that the authorities were also looking for him abroad.

She said that she would not be surprised if the European Commission included Todorov's case in its January report on Bulgaria under the co-operation and verification mechanism.

Zlatanova pointed out that the delay of the judicial reform was worrying against a backdrop of a 7-year-long monitoring mechanism by the EC.