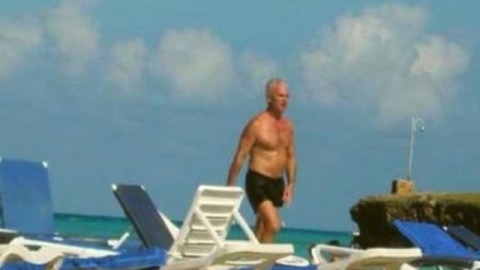 Pictures, reportedly, showing the leader of the Bulgarian extreme-right nationalist Ataka Party, Volen Siderov, on a Cuban beach stirred a fresh scandal in the country.

On Tuesday, the PIK news agency published photographs of Siderov and several of his lawmakers on the famous Cuban Varadero beach at the time State budget 2014 was being voted in the Parliament.

Speaking for bTV Wednesday morning, Ataka lawmaker, Ilyan Todorov, who was part of the group traveling to Cuba, explained the reasons for the visit with media information blackout, saying no one was ever showing or reporting on non-colonialist countries.

He stated that his party wanted to research the roots of colonialism and Cuba was only their first destination to be followed by China, Russia, Venezuela and Syria.

Todorov failed to remember what exact places the group visited, except Havana, saying this was a new location for him. He added the man in swimming trunks on the picture might not have been Siderov.

According to him, every member of the group has paid travel expenses from their own pocket (his own were BGN 2 500), while the research included learning about the health and social system of Cuba. He explained the visit has been organized with the assistance of the Ambassador of Cuba in Sofia, Teresita Capote.

The lawmaker refused to comment on information that another Ataka MP, Denitsa Gadzheva, rumored to be Siderov's girlfriend and the one causing his recent divorce, was part of the group, and the fact she was born in Havana and the trip coincided with her birthday.

Obviously irritated by the persistent questions of the hosts on how long the trip lasted, Todorov changed the subject to media ownership.

"You can check how long we stayed in Cuba, but would you tell us details about the ownership of bTV? Is it American, Jewish or Turkish? If it is Turkish, than your family name suits you," he attacked directly the female host Genka Shikerova.

At the same time, in the Nova TV studio, Denitsa Gadzheva, said the beach picture had poor resolution and she could not tell if it was Siderov on the Cuban beach.

"I can provide much better photographs from this summer, taken on the Bulgarian Black Sea cost. Siderov can afford to go to the beach because he looks so good for his age, contrary to a seal such as Boyko Borisov (former Prime Minister and leader of the opposition, center-right Citizens for European Development of Bulgaria party, GERB – editor's note)," stated Gadzheva.

Siderov and Ataka are known for causing scandals and brawls, even on international level. The most recent one was reported at the beginning of October, when during a visit to Brussels, the nationalists were shown the door in the upscale "House of the Swan" restaurant for being drunk, insisting to be served more alcohol, and refusing to pay their bill.