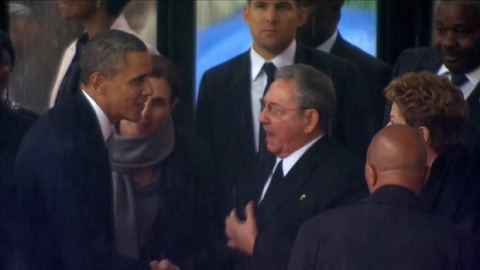 The presidents of Cuba and the US, Raul Castro and Barack Obama met each other with a historic handshake at the memorial service for Nelson Mandela in Johannesburg Tuesday.

The unprecedented friendly greeting between the leaders of the two opposing nations took place against the backdrop of a ceremony celebrating the legacy of reconciliation left by South Africa's former president.

Cuba and the US have been enemies since the Cuban revolution led by Fidel Castro, Raul's older brother, in 1959.

After the non-indemnified nationalization of US business entities in Cuba, the States severed diplomatic relations and imposed a trade embargo on the socialist country.

Obama shook hands with Castro as he was greeting a line of world leaders and heads of state attending the memorial in Johannesburg just before he spoke to the gathered thousands at FNB Stadium in Soweto.

The US and Cuba have taken small steps toward peace in recent years, raising hopes they could be on the verge of a breakthrough in relations.

Still, skeptics caution that the two countries have shown signs of a thaw in the past, only to fall back into old recriminations.