Ban Ki-Moon: Mandela's Lesson is for All Humankind 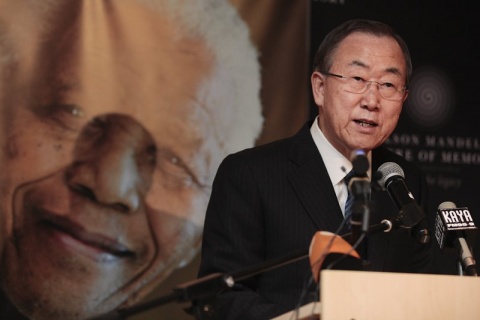 The UN Secretary General Ban Ki-moon paid his tribute to the late South African President Nelson Mandela during the memorial ceremony at the FNB Stadium in Soweto.

"I offer my deepest condolences to the Mandela family and all the South African people. The world has lost a beloved friend and mentor. Nelson Mandela was more than one of the greatest leaders of our time. He was one of the greatest teachers", stated Ban Ki-moon in his address.

The Secretary General spoke of Mandela's struggle for freedom, equality, justice, and democracy.

"His lesson can be shared by all of humankind. Nelson Mandela showed us the way with a heart larger than this stadium. Let us be inspired by his spirit. He fought for each one of us and it is the duty of all of us to keep his memory alive", added Ban Ki-moon.