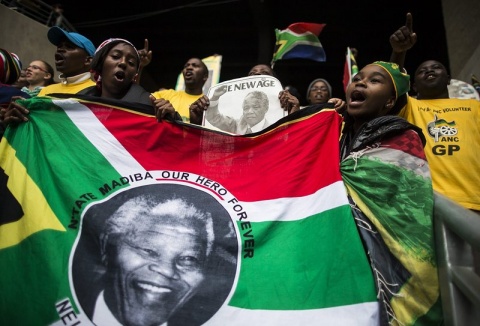 Mourners arrive, chanting and dancing, in the FNB Stadium ahead of the official memorial ceremony in Johannesburg for late Nelson Mandela, photo EPA/BGNES

The national memorial service for former South African President Nelson Mandela has begun about an hour late in Johannesburg.

US president Barack Obama was late for the ceremony due to bad weather conditions in the South African city.

The ceremony started with a choir performance of South African national anthem.

The crowds twice booed South African President Jacob Zuma, who was to give the keynote address at the service. Many South Africans are unhappy with Zuma because of state corruption scandals, though his ruling African National Congress, once led by Mandela, is the front-runner ahead of elections next year.

The memorial is held at the soccer stadium that hosted the opening and closing ceremonies for the 2010 World Cup. There, the former president made his last public appearance.

The FNB stadium in Johannesburg has a capacity of 95 000. The service is also shown on big screens at three "overflow" stadiums.

Despite the heavy rain, thousands of people are expected to attend the memorial for former South African president Nelson Mandela. One-third of the seats at FNB stadium are still empty, and the other three stadiums are yet to be crowded, however mourners keep arriving at the ceremony.

The crowds are in high spirits - singing and dancing, stomping their feet - and the stadium has the feel of a political rally, the BBC reports.

Mandela's widow, Graca Machel, and ex-wife Winnie Madikizela-Mandela arrived at the stadium to huge cheers; the two of them hugged and kissed.

Cameron told the BBC how he had been struck by Mandela's "incredible grace and forgiveness - how he reconciled people after all those years in jail".

Dalai Lama will be among the notable absentees, after twice failing to get a visa to South Africa.

Crowds stood in the rain waiting for several hours to get into the stadium. Many are wearing Nelson Mandela T-shirts or South African football or rugby tops, and are singing songs from the fight against apartheid, the BBC correspondent reports.

The ceremony is aired live by the Bulgarian public TV, BNT, starting at 11 am local time.