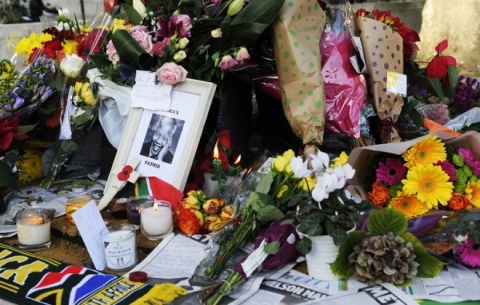 The memorial will be held at the soccer stadium that hosted the opening and closing ceremonies for the 2010 World Cup. There, the former president made his last public appearance.

The FNB stadium in Johannesburg has a capacity of 95 000. The service will also be shown on big screens at three "overflow" stadiums.

The memorial service is one of the biggest gatherings of international dignitaries in recent years as it will be attended by almost 100 world leaders.

Crowds stood in the rain waiting for several hours to get into the stadium. Many are wearing Nelson Mandela T-shirts or South African football or rugby tops, and are singing songs from the fight against apartheid, the BBC correspondent reports.

The ceremony will be aired live by the Bulgarian public TV, BNT, starting at 11 am local time.

The country is observing a series of commemorations leading up to the funeral on Sunday, December 15.