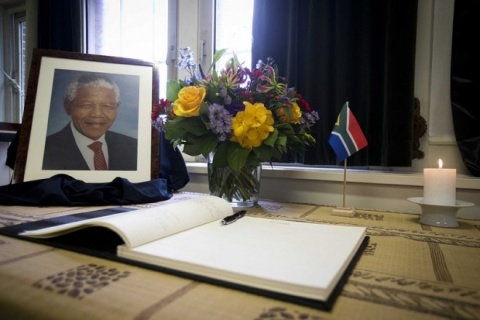 Nelson Mandela passed away on Thursday at the age of 95. Photo EPA/BGNES

South Africa is holding Sunday a day of prayer and reflection for late Nelson Mandela.

Mandela passed away on Thursday at the age of 95 from a lung infection.

President Jacob Zuma had urged South Africans to go to stadiums, halls, churches, and other places of worship on Sunday to remember their former leader.

"We should, while mourning, also sing at the top of our voices, dance and do whatever we want to do, to celebrate the life of this outstanding revolutionary who kept the spirit of freedom alive and led us to a new society. Let us sing for Madiba," he said, using Mandela's clan name.

Zuma is attending a service in a Methodist church in Johannesburg, with other multi-faith services planned throughout the day, the BBC reports.

In Sunday's service at the Regina Mundi Church - which acted as a vital meeting place during the apartheid era - Father Sebastian praised Mandela for his "humility and forgiveness".

"Madiba did not doubt the light. He paved the way for a better future, but he cannot do it alone," he said.

Other senior politicians are also attending services across the country.

A national memorial service is due to be held on Tuesday, while Mandela will be buried with State honors on December 15 in his hometown of Qunu.

South Africans have been holding vigils since Mandela passed away.

The focal points for public remembrance have so far been Mandela's house in Johannesburg and his old home in Soweto, where mourners have lit candles and laid thousands of wreaths of flowers.

Mandela's body will lie in state on Wednesday, Thursday and Friday at the heart of the South African government in Pretoria, before his funeral.

His body will be taken each day from the mortuary to the city hall through the streets of Pretoria.

Members of the public have been encouraged to line the route and form a "guard of honor".

According to the BBC, US President Barack Obama and First Lady Michelle Obama will attend Tuesday's memorial service, along with three other former US presidents, George W Bush, Bill Clinton and Jimmy Carter.

Flags at all official buildings remain at half-mast.

He served a single term before stepping down in 1999.

Mandela's history of lung problems dates to his days in Robben Island, where he was imprisoned for 27 years as part of his fight to overturn the country's system of racial segregation.