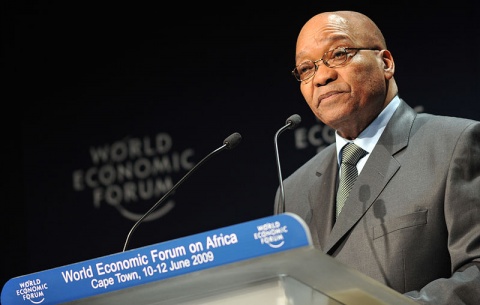 "He is now resting. He is now at peace. Our nation has lost its greatest son. Our people have lost a father."

The statement was made by South Africa's President Jacob Zuma.

The current leader of South Africa announced late Thursday that Nelson Mandela has died at the age of 95, at 8:50 pm local time, surrounded by family.

Mandela, the man known widely by his clan name of Madiba, passed away after years suffering from health ailments.

"What made Nelson Mandela great was precisely what made him human," said Zuma. "We saw in him what we seek in ourselves."

"Mandela's biggest legacy ... was his remarkable lack of bitterness and the way he did not only talk about reconciliation, but he made reconciliation happen in South Africa," said F.W. de Klerk, South Africa's last white president who gave way to Mandela, the country's first black leader.

The African National Congress -- the political party long associated with Mandela -- said "our nation has lost a colossus, an epitome of humility, equality, justice, peace and the hope of millions."

"The large African Baobab, who loved Africa as much as he loved South Africa, has fallen," the party said in a statement, comparing Mandela to a sturdy tree found in Africa. "Its trunk and seeds will nourish the earth for decades to come."

CNN quotes the official SAPA news agency in reporting that scores of people, some in pajamas, due to the late hour, have gathered outside Mandela's house in a Johannesburg suburb after word of his death was announced.

People of all races, some singing and dancing, have paid tribute to the late leader. Others celebrated Mandela's life draped in ANC and South African flags.

They have said the news hadn't sunk in yet, but have expressed relief that he died peacefully.

Similar scenes broke out elsewhere in the country.

While the pain resonated most in his homeland, news of Mandela's death echoed worldwide.

Moments after Zuma spoke, the UN Security Council had a moment of silence in his honor, with Secretary-General Ban Ki-moon later calling Mandela "a giant for justice and a down-to-earth inspiration."

Ex-President George H. W. Bush called Mandela "a man of tremendous moral courage." Another former President -  Bill Clinton- remembered him as "a man of uncommon grace and compassion, for whom abandoning bitterness and embracing adversaries was not just a political strategy but a way of life."

"A great light has gone out in the world," tweeted British Prime Minister David Cameron. "Nelson Mandela was a hero of our time."

Irish leader Enda Kenny said Mandela's name "became synonymous with the pursuit of dignity and freedom across the globe."