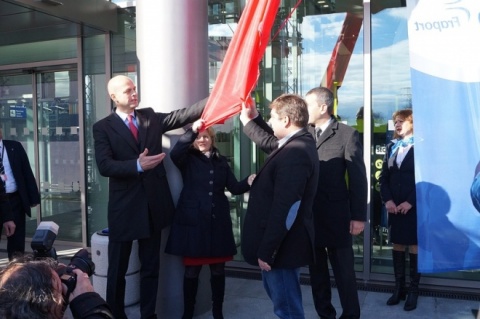 The mayor of Burgas Dimitar Nikolov says the new terminal is a gift for his town. Photo BGNES

The second terminal at the Bulgarian airport in Sarafovo, near the Black Sea city of Burgas, was officially opened Wednesday.

The concessionaire Fraport Twin Star Management AD has invested BGN 80 M in the facility and in the airport's infrastructure. The total investment of the company, including the new Varna airport terminal, as well as a new runway, exceeds BGN 200 M, Deputy Minister of Transport, Information technology and Communications Georgi Todorov pointed out.

Todorov stressed the project was a good example of a public-private partnership.

The Deputy Minister added that the government was working hard to attract new investments in the transport sector.

The Burgas terminal spreads on an area of 21 thousand sq m and has the most advanced conveyer belt.

The construction of the building meets all energy efficiency requirements, the management of the airport reported. The new terminal is expected to help exceed this year's record number of passengers and cargo. The design capacity is 2.7 million passengers and the check-in counters for passengers are 31.