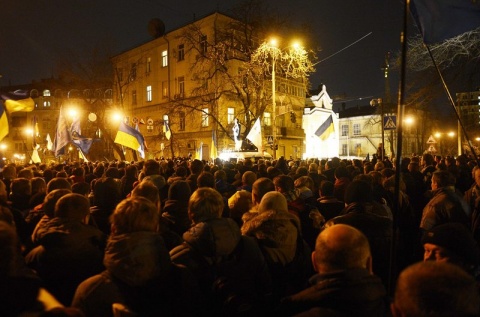 More than 10,000 Ukrainians have assembled around the office of President Viktor Yanukovych in capital Kiev in protest against the scrapping of an Association Agreement with the EU.

Tuesday Ukraine's cabinet, led by PM Mykola Azarov, faced and survived a no-confidence vote by the opposition, tabled in the wake of the government's decision not to sign the treaty.

For many Ukrainians, this signals a moving away from Europe and towards an ever closer bond with Russia.

Yanukovych and Azarov have however stated that they intend to pursue further negotiations with the EU and are firm on the course of implementing reforms for a deeper European integration of the country.

Azarov has also said he will make personal changes in his cabinet due to the violent police cracking down of 100,000 strong rallies in Kiev over the weekend.

Dozens of people, including police officers, have sustained grave injuries in the clashes.

An unconfirmed number of Ukrainian citizens have been detained, some of them to face criminal charges for their actions during the rallies.

Reports from the scenes include cases of wanton police brutality, but also agression on the part of protesters, some of whom wielded iron bars, and threw rocks and incendiary devices at the police.

At least three public buildings in the center of Kiev, including the office of the mayor, have been occupied by protesters.

Tuesday Ukrainian media are reporting acts of solidarity by citizens, such as gathering of warm clothes for protesters, and protesters treating police officers with tea and bakeries.