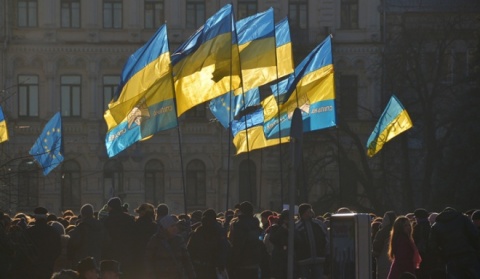 Thousands of citizens and university students staged rallies in the Ukrainian capital against President Viktor Yanukovych's refusal to sign the association agreement with the EU. Photo EPA/BGNES

Thousands of Ukrainians gathered once again Monday night into Tuesday in downtown Kiev in a pro-EU protest rally.

Unlike previous evenings, the rallies last night have been more peaceful, without significant violence and clashes with Berkut, the special riot police units, but tensions persist and are even growing.

Ukraine's Verkhovna Rada (Parliament) has scheduled a government no-confidence vote for Tuesday on the opposition's request.

The opposition further plans to grill the rulers about police brutality during the protests.

Rallies have been reported in Odessa, Lvov, and other cities.

Ukraine made the decision on the EU deal nearly two weeks ago, saying it could not afford to break ties with Moscow. Russia is trying to bring Kiev into its own customs union

Last Friday - as Yanukovych attended the EU summit and refused to sign the agreement - about 10 000 demonstrators took to Independence Square, carrying Ukrainian and EU flags and chanting "Ukraine is Europe".

At dawn Saturday morning, riot police, dispersed the remaining demonstrators with batons and teargas and pushed them out of the central Maiadan square.

Tens of thousands of Ukrainians rallied again on Sunday despite a new government ban on protests in the city center until January 7, 2014.

The rally proceeded peacefully until a group of protesters tried to storm the nearby presidential administration building with an excavator, causing riot police to use teargas, batons and flash grenades to disperse them.

Another group tried to topple a monument of Lenin in downtown Kiev.

Dozens of people injured in the clashes were taken away by ambulance.

The headquarters of the government has been blockaded, with government employees unable to reach work. Demonstrators have also set a tent camp in downtown Kiev.

Police reinforcements are being sent to the capital, Russian newspaper Ukrainska Pravda reported, cited by the BBC.

Ukraine's PM says he sees "all the signs of a coup" as protests intensify.

Prime Minister, Mykola Azarov, has stated the government was aware of plans to seize the parliament building in the capital Kiev, stressing the political opposition in Ukraine had the "illusion" that it could overthrow the existing order."

Speaking during a meeting, Azarov, also cited by the BBC, told Western ambassadors on Monday: "This has all the signs of a coup... That is very serious. We are patient, but we want our partners not to feel that everything is permitted."

Carney added that while violence by the authorities against demonstrators on Saturday had been "unacceptable", the police had in general been more restrained since.

Putin blamed "outside actors" for the protests, which he pointed out, were an attempt to unsettle Ukraine's "legitimate" rulers.

Yanukovych has called for only peaceful rallies and urged both police and demonstrators to observe the law. He is leaving for China Tuesday.