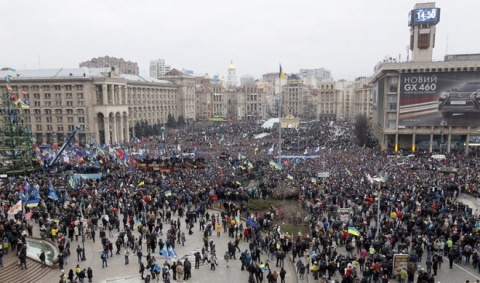 Thousands of citizens and university students have been staging mass rallies for over a week in the Ukrainian capital Kiev against their President Viktor Yanukovych's refusal to sign the Association Agreement with the EU. Photo EPA/BGNES

Ukraine's Verkhovna Rada (Parliament) has scheduled a government no-confidence vote for Tuesday on the opposition's request.

The news was reported Monday by the Wall Street Journal and the Bulgarian news agency Focus, citing the Speaker of the Parliament, Volodymyr Rybak, who is from the ruling Party of Regions and by opposition leader, heavyweight boxing champion, Vitali Klitschko, who chairs the Ukrainian Democratic Alliance for Reform party (UDAR – Punch).

Rallies have been reported in the cities of Odessa and Lvov as well.

Ukraine made the decision on the EU deal over a week ago, saying it could not afford to break ties with Moscow. Russia is trying to bring Kiev into its own customs union

Around 4:30 am Saturday morning, Berkut, the special units of the Ukrainian police, dispersed the remaining demonstrators with batons and teargas and pushed them out of the central Maiadan square.

Tens of thousands of Ukrainians rallied again on Sunday despite a new government ban on protests in the city center until January 7, 2014.

The rally proceeded peacefully until a group of protesters tried to storm the nearby presidential administration building with an excavator, causing riot police to use teargas, batoss and flash grenades to disperse them.

Another group tried to topple a monument of Lenin in downtown Kiev.

Dozens of people injured in the clashes were taken away by ambulance.

The rallies are continuing Monday, though thinner crowds have been reported. A group of around 1 000 demonstrators blockaded the government headquarters Monday morning, preventing officials from getting to work.

Meanwhile, Yanukovych has stated that he was ready to back the resignation of the government if the Rada votes to approve it.

The Wall street Journal writes that few legislators (at least three) have said they are leaving Yanukovych's Party of Regions to join the protesters, but they don't seem to be enough to shift the balance and gather the majority needed for the non-confidence vote's success.

The lawmakers say they are quitting over indignation from the police violence and crackdown on protests early Saturday morning.