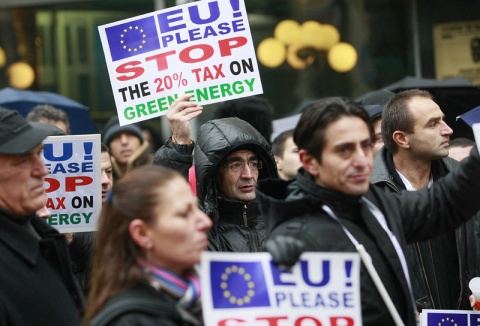 The protest, organized by the Bulgarian Photovoltaic Association (BPVA), was attended by around 100 people, according to reports of private TV station bTV. Photo by BGNES

Renewable energy producers staged a protest against a proposed 20% tax on their revenues  in front of the Council of Ministers building in Sofia.

The protest, organized by the Bulgarian Photovoltaic Association (BPVA), was attended by around 100 people, according to reports of private TV station bTV.

The demonstrators expressed their dissatisfaction with the proposal to levy a 20% tax on the revenues of photovoltaic plants and wind farms.

The proposal is expected to be put to a first-reading vote in Parliament on Tuesday.

The new 20% tax was also condemned by the German-Bulgarian Chamber of Industry and Commerce and Confindustria Bulgaria, the association of Italian business in Bulgaria, which cautioned that the adoption unfounded, unannounced and discriminatory measures through legal changes would result in a serious outflow of trust in Bulgaria's energy sector and deterioration of the investment climate in the country.

Renewable energy producers complained Monday that many of them had developed their businesses through loans from banks and the imposition of such a tax on their turnover would substantially complicate their situation.

In a media statement, the BPVA defined the decision for the new tax as scandalous, opaque, discriminatory, and illegal.

Industry representatives insisted that the measure would discourage foreign and local investors from the most successful sector of the Bulgarian economy which had absorbed over EUR 4 B of investments and created thousands of jobs.

Nikola Nikolov from the BPVA underscored that the tax was unconstitutional and the state offered no service in exchange for it.

In an interview for the Bulgarian National Radio, Ruslan Stefanov from the Center for the Study of Democracy argued that the measure would trigger a wave of bankruptcy of renewable energy companies and referred to the proposal as an example of opaque governance.