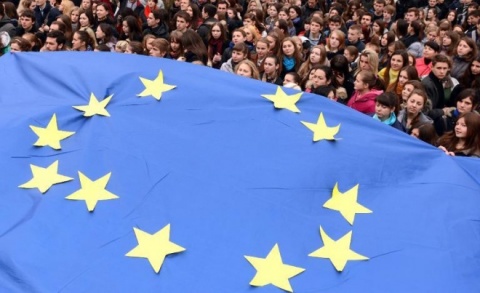 Thousands of citizens and university students staged rallies in the Ukrainian capital against President Viktor Yanukovych's refusal to sign the association agreement with the EU. Photo EPA/BGNES

Riot police in the Ukrainian capital Kiev have forcefully pushed out of the central square overnight thousands of pro-EU protesters.

The BBC cites witnesses saying they were dispersed with police acting violently, beating demonstrators with batons and using teargas.

This was the seventh night in a row when thousands of citizens and university students staged rallies in the Ukrainian capital against President Viktor Yanukovych's refusal to sign the association agreement with the EU.

Participants in the Friday night rally have said a number of people had been hurt. Ambulances were on the scene and some demonstrators were seen bleeding from their heads and arms.

"It was horrible. We were holding a peaceful demonstration and they attacked us. They threw us away like garbage," one protester is quoted in saying.

Opposition MP Andriy Shevchenko, tweeted that dozens of people had been hurt and at least 33 had been arrested.

According to Reuters news agency, one of its cameramen and a photographer were among the injured and the photographer was left bloodied by blows to the head.

Ukrainian media cite the police saying they had decided to clear Independence Square after "a number of incidents," but it remains unclear what incidents they were referring to.

The BBC correspondent in Kiev reports that by morning no protesters remained on the square.

In addition to Kiev, where clashes between demonstrators and riot police occurred on a number of occasions, rallies have been reported in the Black sea city of Odessa, in Lvov and other cities.

The Ukrainian opposition, led by former heavyweight boxing champion, Vitali Klitschko, who chairs the opposition Ukrainian Democratic Alliance for Reform party (UDAR - Smash), has urged pro-EU protesters to not give up.

The other opposition leader Yulia Tymoshenko, who is in prison, announced she was beginning an indefinite hunger strike.

There was also a smaller rally of Yanukovich supporters a few hundred meters away.

In Vilnius, EU leaders warned they would not tolerate Russian interference in the bloc's relations with former Soviet republics.

The summit reached provisional accords with Georgia and Moldova.