Pro-EU Protesters Unwavering in Kiev ahead of Vilnius Summit 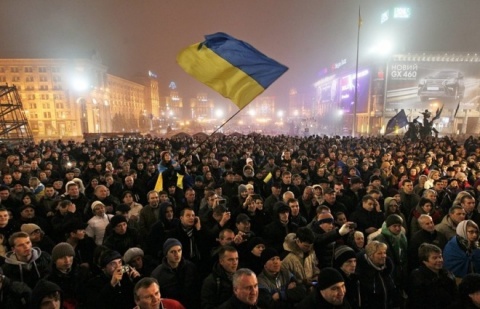 Ukrainian pro-EU protesters in Kiev are urging President Viktor Yanukovych to sign the association agreement with the EU. Photo EPA/BGNES

Thousands of Ukrainians have defied sub-zero temperatures and rallied in downtown Kiev overnight against their government's surprising decision to freeze the EU integration bid.

This was the sixth night in a row when citizens and university students staged rallies in the Ukrainian capital. On Wednesday, they blockaded the government headquarters and are pledging to stay all day and night Thursday on the central Maydan square, ahead of the much anticipated Vilnius summit, which also starts Thursday.

Donations of warm clothes, food, and wood for heating for the protesting students are ongoing.

Students are urging President Viktor Yanukovych to change his decision and sign the association agreement with the EU.

In addition to Kiev, where clashes between demonstrators and riot police occurred on a number of occasions, rallies have been reported in the Black sea city of Odessa, in Lvov and other cities.

The Ukrainian opposition, led by former heavyweight boxing champion, Vitali Klitschko, who chairs the opposition Ukrainian Democratic Alliance for Reform party (UDAR - Smash), has urged pro-EU protesters to not give up.

The other opposition leader Yulia Tymoshenko, who is in prison, announced she was beginning an indefinite hunger strike.

Meanwhile, Ukrainian Prime Minister Mykola Azarov called for three-party negotiations between Russia, Ukraine, and the EU, and stated that the issue about EU integration could be put on the table at the summit in the spring. He admitted Kiev was now focusing on rebuilding its relations with Russia.

The signing of the association agreement had been set for November 29 in the Lithuanian capital Vilnius, where several other ex-Soviet states will forge closer ties with the EU. This is also the day when Ukraine will learn what its future will be.

Yanukovych announced he would take part in the EU Eastern Partnership summit in Vilnius. He is to arrive in Lithuania Thursday amidst anticipations the world will learn his final position one day ahead of the signing.