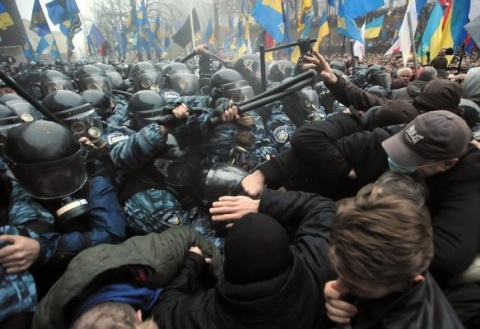 New clashes between riot police and pro-EU protesters have been reported overnight Monday into Tuesday in the Ukrainian capital Kiev.

A number of people have sustained injuries.

The protesting citizens insist on European integration of Ukraine. The clashes took place hours after Ukrainian President Viktor Yanukovych said that the decision to not sign the association agreement with the EU was not taken lightly and urged the demonstrators to calm down.

Meanwhile, opposition leader Yulia Tymoshenko, who is in prison, announced she was beginning an indefinite hunger strike.

Several rallies in Kiev have been held over the last few days. Rallies have been reported also in the Black sea city of Odessa and other cities.

In addition to Vitali Klitschko, other opposition leaders Arseniy Yatsenyuk and Oleh Tyahnybok have also urged Yanukovych to sack Prime Minister Mykola Azarov and to sign the agreement.