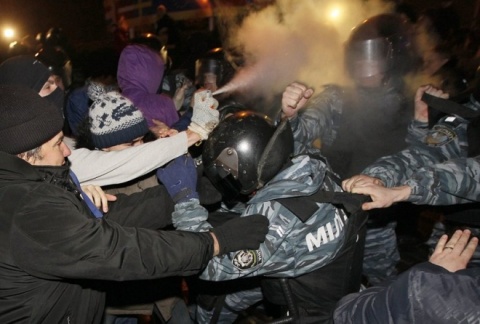 Riot police have used batons and teargas in fresh clashes with pro-EU protesters in the Ukraine's capital Kiev. Photo EPA/BGNES

New clashes between riot police and pro-EU protesters have been reported Monday morning in the Ukrainian capital Kiev.

As demonstrators tried to blockade the government headquarters, they were violently pushed back by police with batons and teargas.

Official reports list the number of protesters Monday at 1 000 to 2 000, however, photographs from Kiev's central Maydan square, show a much larger crowd.

Several rallies in Kiev have been held over the last few days, but Sunday's has been the largest so far. Rallies have been reported also in the Black sea city of Odessa and other cities.

In addition to Vitali Klitschko, opposition leaders Arseniy Yatsenyuk and Oleh Tyahnybok addressed the crowd. They too urged Yanukovych to sack Prime Minister Mykola Azarov and to sign the agreement.

In a sign that Ukraine's government may be backtracking on the EU treaty debacle, Azarov said Monday the country might sign the agreement at an EU-Ukraine summit early next year