Ukraine Had No Option - Drop EU for Russia or Be Crushed 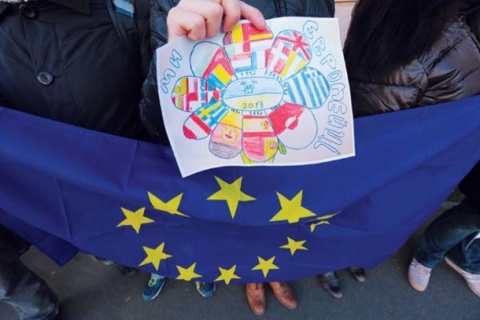 Activists in Kiev carry children's drawings and EU flags that symbolize Ukraine’s move to the EU. Photo by Kyiv Post

By Ambrose Evans-Pritchard
The Telegraph

Twenty years after the collapse of the Soviet Union, Ukraine is slipping back under Kremlin control. Ukraine’s shock decision to opt for Vladimir Putin’s Russia and pull out of EU talks on the eve of an historic deal is a dramatic upset to the European balance of power. It is the first major defeat for the EU in its eastward march since the fall of Communism. While the region’s geopolitics remain fluid, the upset may prove as fateful as the move by the Kossack chief Bohdan Khmelnytsky to turn his back on the West and accept Tsarist suzerainty in the 1640s.

Ukraine’s Prime Minister, Mykola Azarov, told the country’s parliament that it has been forced to cancel its trade and pre-accession deal with the EU because Russian sanctions are strangling the economy, “pushing Ukraine to the brink of a huge social crisis”.

The accord was due to be signed at the EU’s Vilnius summit this week. The volte-face stunned EU officials, torn between fury over Ukraine’s conduct and deep alarm over what has happened.

Kiev said it acted in the “national security interest”.

It has emerged that President Viktor Yanukovych flew secretly to Moscow few weeks ago to see Putin. The pro-Kremlin outlet Russia Today said Ukraine had wisely stepped back from the EU “horror show” and accepted the real worth of Russian ties rather than hot air from Brussels.

Ukraine had dodged a “death spiral” by protecting its eastern trade flows. Putin has been tightening the screws for months, blocking shipments of goods and targeting heavy industry in the eastern region that depends on the Russian market. A freeze on imports of railway carriages has hit 80 per cent of Ukraine’s carriage output. Another victim is Roshen chocolate, owned by Petro Poroshenko, a champion of the EU cause in Ukraine’s parliament. Roshen sales in Russia have been banned for “toxic impurities”. The guerrilla warfare tactics have pushed Ukraine to the brink of financial collapse. Foreign reserves have fallen by 30 per cent this year to .6 billion (Dh75.6 billion)). This is just 2.3 months of imports, far below the “safe” cover level of six months. The economy contracted 1.5 per cent in the third quarter, pushing bad loans in the banking system to 30 per cent. Total foreign debt has reached 77 per cent of GDP. The country has to roll over or repay .8 billion in foreign debt by the end of 2014, an almost impossible task given that capital markets are effectively closed. The government has been trying to play off Russia against the EU and International Monetary Fund, but the strategy has blown up in their faces.

The IMF suspended a billion standby credit in 2011 for non-compliance and has continued to demand radical reforms before any more money is released.

Azarov said the “straw that broke the camel’s back” on the EU deal was a fresh list of harsh demands by the IMF this week, including a 40 per cent rise in gas bills, a salary freeze, big budget cuts and lower energy subsidies.

“All they were willing to lend us is enough to pay them back again,” he said.

An IMF spokesman said Ukraine needs “deep-reaching structural reforms” and exchange rate flexibility — IMF code for a devaluation. Liza Ermolenko from Capital Economics said the rupture with the EU is a grave blow to Ukraine’s long-term hopes, but averts an immediate crisis. “It might have been dangerous for them to sign the deal because Russia would have retaliated. That threat has been lifted,” she said.

Ukraine's bizarre predicament was captured by Moody’s when it cut the country’s debt rating to C grade in September because of the forthcoming EU deal.

“While Moody’s views this agreement as credit positive in the medium-term, given that it will support Ukraine’s institutions, the short-term impact of a negative reaction by Russia outweighs these benefits,” it said.

Putin has offered a three-way dialogue with the EU and Ukraine, hoping to repeat the diplomatic feat he pulled off with the West over Syria’s chemical weapons. “We are ready to participate in such talks. This is the test of how serious our European partners are,” he said.

Mats Persson, from Open Europe, said the collapse of talks is a major defeat for EU strategy.

“The lesson is that EU’s soft-power diplomacy has hit its limits. Playing carrot and stick doesn’t work when you come up against a real hard power like Russia. This is a highly significant moment,” he said. The problem is intractable because Ukraine has reneged on countless promises. The EU has accused the government of “selective justice” against opposition leaders, including former premier Yulia Tymoshenko, who is still languishing in prison after a hunger strike last year. Germany has demanded her release as condition for any EU deal, but she is still viewed as a major political threat by Yanukovych.

The EU says the door is “still open” for Ukraine but opinion is split. One official told the EU Observer that Yanukovych should be left to stew in his own juice.

“We should make clear that Ukraine is not welcome. There should be no more phone calls. No more offers. Six months down the line, when left alone to deal with Russian pressure, he will come to us on his knees,” he said.

Yet for all the fury with Ukraine in Brussels, there is no disguising the damage to EU prestige and power. It is astonishing that this pivotal nation of 46 million people should be returning to Russia’s orbit 22 years after breaking free from the Kremlin. European statesman Jacques Delors once likened the EU to a bicycle that must keep rolling forward to stay upright. It has just toppled over.