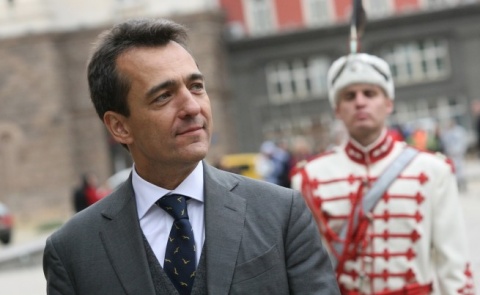 French Ambassador to Bulgaria Xavier Lapeyre de Cabanes has argued that the ongoing anti-government rallies in the country point to long-standing unsolved issues.

"The protests today are not only driven by this government, the problem has existed for 25 years," the French Ambassador announced in a Saturday interview for Nova TV, commenting on the 5-month-old movement against the Socialist-led Cabinet.

The French envoy was in charge of the public relations of the French Embassy in Bulgaria the early 90s and his wife is Bulgarian.

In his Saturday interview, he claimed that Sofia was in much better condition than in the early years of the Transition period.

"People look much better-dressed, the economy is developing, the subway is clean," the French Ambassador to Bulgaria stated.

"People are in the streets because things have not changed sufficiently over the past 20 years. It is only normal in a democracy for a person to feel dissatisfied at times. The difference between a totalitarian regime and democracy is that in the case of the latter, one has the right to express their dissatisfaction. The difficult thing is to turn dissatisfaction into political action. I have not been able to grasp the goal of these protests yet, but this is probably due to the fact that I have not spent enough time talking with the protesters," Xavier Lapeyre de Cabanes explained.

"I believe that Bulgaria went through a lot of changes over the past 20 years and the people are used to frequent elections. This is normal for a democratic regime and it is a rather positive element because the Constitution functions. On the other hand, the problem is that citizens are still obviously dissatisfied with the political system they have now. The clearest proof of their discontent is the low voter turnout at the parliamentary elections – at 52% it is a very low rate. This shows that Bulgarians have moderate confidence in political parties seeking to rule the country. This is slightly worrying" the French Ambassador to Bulgaria declared.

"The current Parliament represents only around 1/3 of the voters, so the majority was elected by a mere 20% of the voters. Naturally, this does not make the majority illegitimate, because in a democratic regime, one has to vote," he emphasized.

"A problem which existed back when I was here in the 90s was the high corruption rate. A lot of measures have been adopted in the meantime – a commission on confiscating criminal assets has been established," the French envoy noted.

Asked to comment on fears over the series of xenophobic attacks, he argued that the attitude had not reached dramatic proportions.