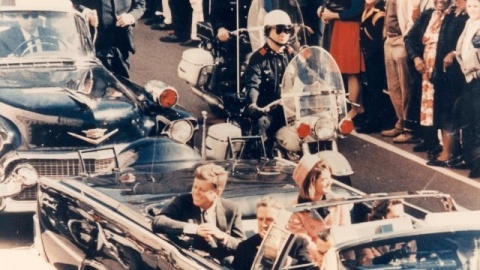 JFK and First Lady Jacqueline Bouvier in Dallas, TX, minutes before bullets were fired, killing one of the most revered US presidents, file photo

The United States and the world are marking Friday 50 years since President John F Kennedy's murder by an assassin's bullet in Dallas, Texas.

Kennedy AKA JFK remains in history as the youngest and one of most revered presidents of the United States and the first Catholic elected to the post. His unfinished term in office was marked by the Cold War, the Cuban missile crisis and sending man to the moon.

However, he is also remembered for ordering one of the most disastrous episodes of the Cold War, the failed Bay of Pigs invasion of communist Cuba by a CIA-trained paramilitary force of Cuban exiles. After his death, reports about a number of extramarital affairs, including with Marilyn Monroe and other actresses, also emerged.

A memorial ceremony will be held in Dallas Friday, including a performance of Dallas Symphony Orchestra, an address of Mayor Michael Rawlings and bells tolling at the minute of Kennedy's death.

On Wednesday, President Barack Obama and First Lady Michelle Obama laid a wreath at Kennedy's tomb at the national military cemetery in Arlington, Virginia. They were joined by former President Bill Clinton, who as a youth met Kennedy, by his wife, former First Lady and Secretary of State Hillary Clinton, and by members of Kennedy's family.

JFK, a Democrat, was part of one of the most prominent US political dynasties of the 20th Century, The BBC reminds.

His father, Joseph, was a wealthy businessman who served in senior positions in the government of President Franklin Roosevelt, including as ambassador to Britain.

Two of his brothers later served as US senators and ran for president. One of them, Robert AKA Bobby and RFK, who served as Senator and Attorney General, was himself assassinated in 1968. Senator Edward (Ted) Kennedy, who died in 2009, was a champion of progressive causes including universal healthcare.

President Kennedy was assassinated in Dallas, Texas, at 12:30 pm local time on Friday November 22, 1963, while on a political trip to Texas to smooth over frictions in the Democratic Party between liberals and conservatives. He was shot once in the throat, once in the upper back, with the fatal shot hitting him in the head.

Kennedy was taken to Parkland Hospital for emergency medical treatment, but pronounced dead at 1:00 pm. Only 46, President Kennedy died younger than any US president to date. Lee Harvey Oswald, an employee of the Texas School Book Depository from which the shots were suspected to have been fired, was arrested on charges for the murder of a local police officer, but was never subsequently charged with the assassination of Kennedy. He denied shooting anyone and was himself killed by a local nightclub owner, Jack Ruby, on November 24, before he could be indicted or tried. Ruby was then arrested and convicted for the murder of Oswald. Ruby successfully appealed his conviction and death sentence but became ill and died of cancer in jail on January 3, 1967, while the date for his new trial was being set.

President Lyndon Johnson created the Warren Commission - chaired by Chief Justice Earl Warren - to investigate the assassination, which concluded that Oswald was the lone assassin. The results of this investigation are disputed by many.

Behind the glamour, the Kennedys experienced many personal tragedies. First Lady Jacqueline Lee "Jackie" Bouvier (1929–1994) had a miscarriage in 1955 and a stillbirth in 1956. A son, Patrick Bouvier Kennedy, died shortly after birth in August 1963. They had two children who survived infancy.

Jack's elder brother, Joseph P. Kennedy, Jr., died in World War II at the age of 29. It was Joe Jr. who was originally to carry the family's hopes for the Presidency. Then both Jack himself, and his brother Bobby died due to assassinations. Ted had brushes with death, the first in a plane crash in 1964 and the second due to a car accident in 1969 known as the Chappaquiddick incident. Ted died at age 77, on August 25, 2009, from the effects of a malignant brain tumor.

Caroline Bouvier Kennedy was born in 1957 and is the only surviving member of JFK's immediate family. John F. Kennedy, Jr., was born in 1960, just a few weeks after his father was elected. John Jr. died in 1999, when the small plane he was piloting crashed en route to Martha's Vineyard, killing him, his wife, Carolyn Bessette, and his sister-in-law.

Caroline is now the US ambassador to Japan.