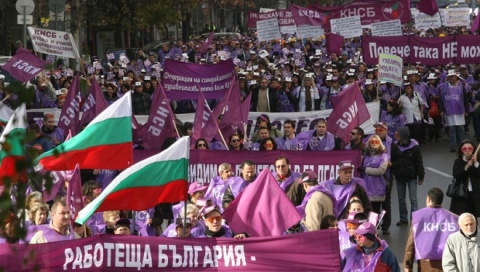 KNSB, one of the two largest trade unions in the country, staged a rally in Sofia to demand a 10 percent increase in public sector salaries and reforms. Photo by BGNES

No serious clashes have occurred so far in Bulgaria’s capital Sofia, as it witnessed another day of heated protests on Wednesday.

Three separate rallies were held Wednesday in front of the Parliament building, which was cordoned off by riot police.

Protesters led by university students started their now-traditional anti-government demonstration at 11 am EET.

At the same time, KNSB, one of the two largest trade unions in the country, staged a rally in Sofia to demand a 10 percent increase in public sector salaries and reforms in the inefficient and corruption-prone healthcare and energy sectors.

While some unionists expressed discontent with the anti-government protesters and even attempted to push them back at one point, others decided to join the demonstration once KNSB’s rally was over.

Hundreds of taxi drivers also gathered near Parliament to protest for better working conditions. Scores of taxi cabs were parked in front of Alexander Nevsky Cathedral in Sofia, but hundreds more were unable to get there as police had blocked key streets.
Meanwhile, a sitting of Bulgaria’s Consultative Council on National Security was held at the office of President Rosen Plevneliev.

Controversial politician Nikolay Barekov gathered several hundred of his supporters in front of the building. He had threatened to stage a blockade of the presidential office and sabotage the sitting if he was not allowed to attend the sitting. However, the sitting started as planned at 2 pm EET.

Wednesday marks the 160th days since the start of the ongoing anti-government protests in Bulgaria. Protesters have demanded the resignation of the Socialist-led government over a number of corruption scandals.