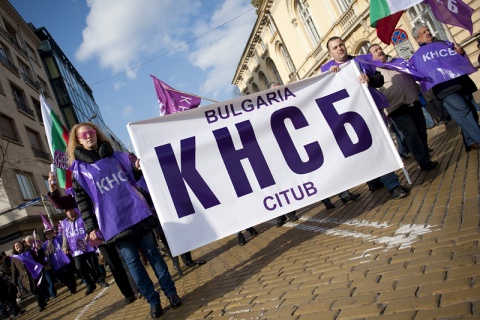 The KNSB rally moved towards the Parliament building. Photo by BGNES

The rally of the Confederation of Independent Syndicates in Bulgaria, KNSB, has pushed back the student protesters in front of the Parliament building in Sofia.

The unionists called over a megaphone to be allowed to pass and raised a small stage on which to speak, reports Offnews.

There were no tensions between the different protesting fractions, and some of the KNSB speakers even called forth the students. However, the student protest had already moved in a different direction.

Some of the traditional anti-government protesters voiced their dissatisfaction with the KNSB rally, saying that their aim is not to topple the government, but to negotiate with it.

Around 11:20 AM, the protesters in front of the Parliament were approximately 1 000.