Clashes with Riot Police Reported at Anti-Govt Rally in Sofia 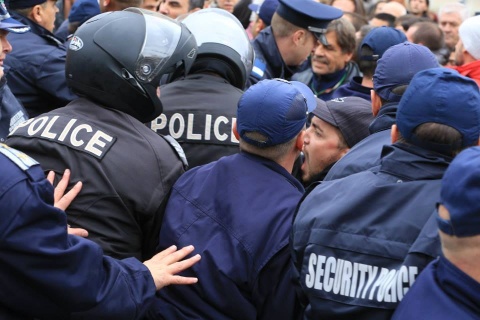 New violent clashes between riot police and antigovernment protesters have been reported in Bulgaria's capital Wednesday. Photo by BGNES

The first clashes between riot police and protesting Bulgarian citizens and university students have been reported Wednesday in downtown Sofia during the mass antigovernment rally.

A huge perimeter around the building of the Parliament is sealed and closed for people and traffic as three protests are being held in the Bulgarian capital – of people demanding the immediate resignation of the Socialist-backed government of Prime Minister, Plamen Oresharski, of taxi cab drivers, and of trade unions, with the latter two asking for better work conditions.

Security has been biffed to the maximum with huge deployment of riot police. So far triple-line cordons have prevented the merger of the protests of cab drivers and the antigovernment rally.

The public radio reported slightly after 12 pm that the first violent clashes occurred when protesting citizens tried to merge with the march of the trade unions near the Parliament building. They attempted to enter the security perimeter from the intersection of "Oborishte" street and "Vasil Levski" boulevard, which is not in immediate proximity of the building, but were pushed back with extreme force by police in heavy riot gear – helmets, batons, and shields.

The situation has calmed down after that, the public radio reporter said.