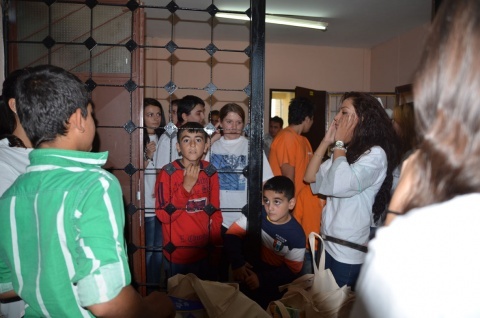 Bulgarian students from New Bulgarian University are pictured here volunteering in support of the university's charity campaignt for Syrian refugees accommodated in the shelter in Ovcha Kupel Sofia district. Photo by NBU.bg

The UN's refugee agency has voiced concerns over reports that Greece and Bulgaria were turning back Syrians fleeing their war-ravaged homeland, forcing them to return to overloaded Turkey.

Edwards said the agency was particularly worried about a group of 150 Syrians, including families with children, barred Tuesday from entering Greece at Evros, on the border with Turkey.

"UNHCR received information from villagers of the group being detained and transported in police vehicles to an unknown location, although they have not been transferred to a reception centre.

"Their current whereabouts is unknown to us," he said, adding that there were fears they had been sent back to Turkey.

"Introducing barriers, like fences or other deterrents, may lead people to undertake more dangerous crossings and further place refugees at the mercy of smugglers," Edwards said.

And in the Turkish Republic of Northern Cyprus -- recognized only by Turkey, and not part of the European Union -- there were reports that Syrians arriving by boat were being detained and sent to Turkey.

More than 2.2 million Syrians have fled their homeland since the civil war erupted in March 2011, and the vast majority have headed to neighboring Turkey, Lebanon, Jordan and Iraq.

The UN repeatedly has called on other nations to help Syria's neighbors shoulder the burden, and Edwards underlined that Turkey alone had taken in at least 500,000.

"UNHCR is calling for a global moratorium on any return of Syrians to neighboring countries," said Edwards, adding it would be a "concrete gesture of solidarity".

"Returning Syrian refugees to Turkey or other neighboring countries only adds to the challenges faced by these governments and local communities to support and provide assistance to refugees," he said.

Edwards said fellow members of the 28-nation bloc needed to spread the load.