'Everything Will Be Fine' Riot Policeman Tells Girl in Moving Photo 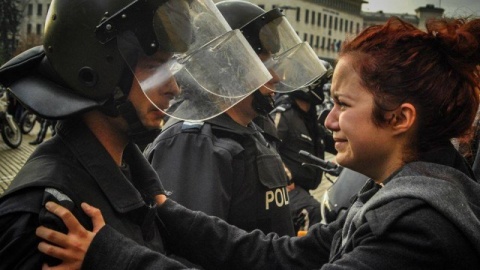 The picture was taken by photographer Stefan Stefanov, a student at the Sofia-based National Academy for Theater and Film Arts

An heartwarming photo showing a Bulgarian riot policeman interacting with a stressed protesting girl has gone viral on social media.

The picture was taken by photographer Stefan Stefanov, a student at the Sofia-based National Academy for Theater and Film Arts, during a massive anti-government rally in Sofia.

As the remarkable shot quickly captured the public imagination in Bulgaria, the young girl featured in it made the following comment on Facebook:

“Among policemen, there were some well-intended ones. The one whose shoulders I'm holding had some blood on his nose, obviously he had scratched it somewhere. I saw him protecting people and trying to stop policemen from beating us. I started crying and told him to take care of himself. He replied, "Hold on. Everything is going to be fine". He had tears in his eyes...”

The ongoing anti-government protests in Bulgaria were triggered by the appointment of controversial media mogul Delyan Peevski as Chair of the State Agency for National Security in June – and were fueled by a number of other controversial appointments and wider concerns about corruption.

Tensions escalated on Tuesday, as police violently cracked down on a massive anti-graft rally in the Bulgarian capital.