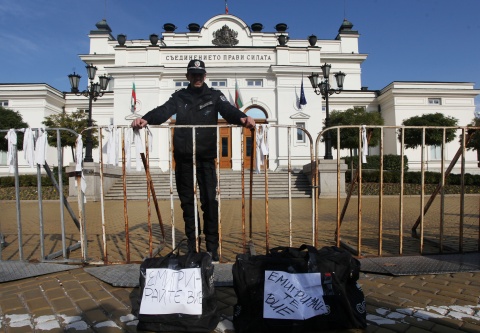 Bulgaria’s Parliament approved at first reading the draft state budget for 2014 on Thursday, two days after university students, who tried to blockade politicians inside the  building as part of ongoing anti-governmental protests.

The draft was supported by the MPs from the ruling coalition – the Socialist and ethnic Turkish party.

Out of all 211 Mps attending the parliamentary session, 116 backed the draft budget, 78 voted against and 17 abstained.

The cabinet plans to allocate BGN 500 M in next year’s budget to a public investment program aimed at modernizing roads, ports, water supply systems and other infrastructure projects.

The government plans to increase pensions by 3 percent starting July 1, 2014, and estimates revenue for that year at about BGN 31 B and spending at BGN 32.4 B.

The minimum salary in the country will be increased to BGN 340 as of January 1, 2014 if the draft budget passes conclusively.