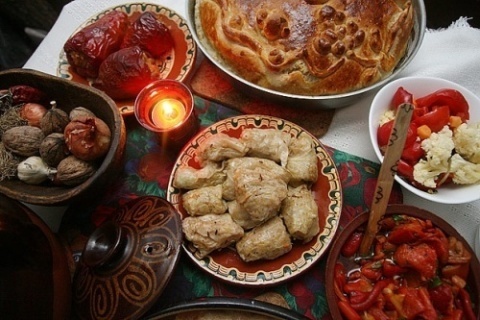 Traditional Christmas Eve dinner, which Orthodox Bulgarians will be able to enjoy after the 40-day fasting period. Photo by Sofia Photo Agency

Bulgarian Orthodox Christians have one more day before they enter on Friday a 40-day fast that will end on December 24, Christmas Eve.

The Christmas Fast is the second longest after the seven-week Eastern Fast.

On November 14, Bulgarian Orthodox Christians mark Koledni Zagovezni, or Christmas Shrove, which is the last day on which one can eat meat before Christmas.

During the Christmas Fast one can east fish on December 06, Nikulden, or the day of St Nicholas, and on November 21, Vyvedenie Bogorodichno, or The Presentation of the Theotokos into the Temple.

Only vegetable fats are allowed, such as vegetable oil and olive oil.

Christians observing the Christmas Fast are also not allowed to consume alcohol throughout the 40-day period.

Weddings are forbidden from November 15 to November 21 and from December 20 (Ignazhden, the feast day of Saint Ignatius of Antioch) to January 06(Booyavlenie/Yordanovden, or the feast of Epiphany).

Unlike the Roman Catholic Church preaching meat abstinence on Fridays only during the whole fasting period, the Orthodox Church recommends abstinence throughout all 40 days.

Exceptions are made only for children, pregnant women, the sick and elderly, who are allowed diary products.

The Christmas Fast aims to purify people's bodies and souls, to propel the individual to do decent deeds and to repent over sins.