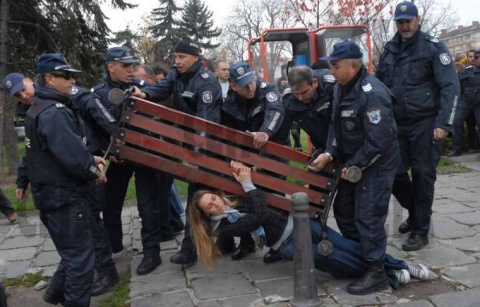 A Czech citizen has been beaten and arrested in downtown Bulgarian capital Sofia during the Tuesday antigovernment protest rally near the Parliament.

Protesters reported that the man, named Petr Mitrenga, had been simply standing on the street and filming the violent clashes, when riot police knocked him to the ground and dragged him to a holding bus. The entire incident can be seen HERE in an amateur footage of one of the participants in the rally, Konstantin Pavlov.

Petr's wife Rositsa, who is Bulgarian, confirmed for bTV Wednesday morning that her husband was still in custody at the Fifth Police Precinct in Sofia.

"We had to attend today the funeral of a friend and I am traveling alone, because they do not want to release him. He called me from the bus before they took his phone away. He told me that police punched him, pushed him to the ground and kicked him," the wife said.

On Tuesday, the protest turned very violent with demonstrators beaten and dragged on the ground by police. 23 people were arrested.

Tuesday evening, after ten hours of antigovernment protests in Sofia, with tensions and direct clashes between riot police and demonstrators, huge government reinforcement arrived around 9:30 pm, and violently pushed people with their shields and batons from the square in front of the Parliament.

A rally against the Socialist-backed government is held once again Wednesday for the 153rd day in a row.

Sofia looks like a "war" zone with unprecedented in recent history 10 000 riot police and gendarmerie with shields, helmets, batons, and armored vehicles, deployed in its downtown.

The building of the Parliament is guarded by new and reinforced iron fences, while citizens passing on nearby streets are asked to show ID cards.