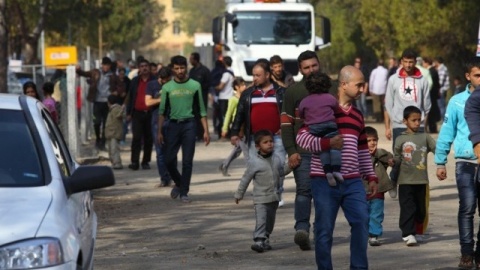 About 60 refugees arrived Friday evening on buses with license plates from the southern city of Haskovo and were simply dropped off near the central Sofia mosque. Photo bTV

The Bulgarian authorities are investigating how sixty refugees landed Friday evening in the capital Sofia.

They arrived shortly before 10 pm on buses with license plates from the southern city of Haskovo and were simply dropped off near the central Sofia mosque.

They were spotted by police patrols and police cordoned off the area.

Meanwhile, the press office of the Interior Ministry informed that both buses have taken the refugees back to the shelter in the southern town of Harmanli. It also disproved earlier reports that all 60 were Syrian nationals, explaining only some of them came from Syria. The status of these people, however, remains unknown.

It is presumed that they are refugees who had to be accommodated at private addresses in the capital, as none of the Sofia shelters has received information about having to admit new groups of people.

The Interior is also yet to clarify if the refugees have become victims of fraud and if someone promised them that they will be placed in Sofia in exchange of money.

The country is the gateway to the European Union for refugees fleeing Syria via Turkey, many crossing the border illegally to seek asylum.

The country expects to receive EU aid in order to deal with the ongoing refugee influx.
The fence that Bulgarian authorities are building over a section of the Bulgarian-Turkish border will be ready by February next year.