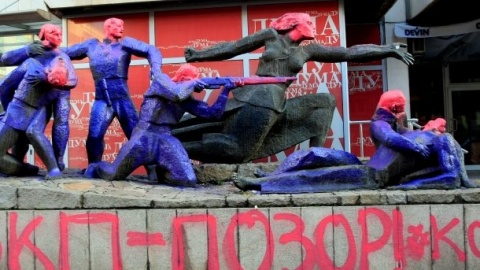 Minor Bulgarian rightist party Democrats for Strong Bulgaria has issued a statement of support for the 6 activists detained overnight for spraying a monument in front of the Bulgarian Socialist Party in central Sofia.

The six include well-known blogger Asen Genov, who was especially active during summer and fall anti-government protests in Bulgaria, as well as 4 Democrats for Strong Bulgaria.

A police patrol caught the group in the act of spraying the monument - which depicts communist WW II resistance fighters - with pink paint, and an inscription saying "Shame on the Bulgarian Communist Party!"

While some have commended the act as showing outrage with the communist regime, others interpreted it as disrespectful for those who lost their lives in the struggle against Nazism and Fascism.

The four DSB members have been released as of Thursday afternoon, while Asen Genov, together with a woman, Tsvetelina Sarbinska, have been detained for 24 hours.

DSB leader Radan Kanev, who is by profession a lawer, has promptly travelled to the police office where the detainees were held.

The Bulgarian Socialist Party has issued a statement of protest against the act. Bulgarian Interior Minister Tsvetlin Yovchev has labelled it "an act of vandalism."

DSB is a leading party of the newly formed Reformist Bloc, consisting of mainly rightist parties which failed to get into parliament after May 12 early elections.

The Bloc has stood behind the requests of summer protests against the cabinet of PM Plamen Oresharski, supported by the Socialist Party and the liberal Movement for Rights and Freedoms.