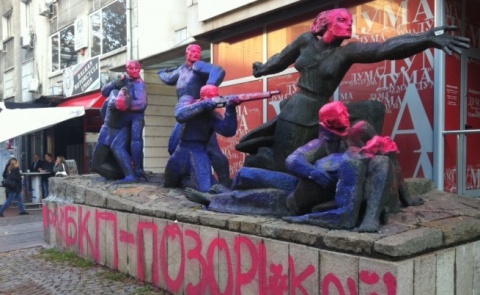 Asen Genov and a group of Bulgarian artists tried to paint pink and blue the monument in front of the Socialist party headquarters in Sofia, but were arrested. Photo by BGNES

Asen Genov, a Bulgarian activist and widely-read blogger, has been arrested early on Thursday as he and a group of artists tried to paint the memorial in front of the Socialist Party headquarters.

Another five people have also been arrested and taken to a police unit in Sofia shortly after 5am.

Asen Genov has been one of the most active participants in the anti-government demonstrations in Bulgaria and the "protest network" association that they established.

The association brings together the administrators and members of some of the leading anti-government groups on social media and aims to act as an "instrument for cooperation and contact" open to all.

The series of anti-government rallies in Bulgaria started on June 14 in response to the election of controversial media tycoon Delyan Peevski as head of the State Agency for National Security (DANS).

Although the appointment was cancelled, the move did not appease public discontent and the protesters went on to demand the resignation of the socialist-led government of Prime Minister Plamen Oresharski over ties with oligarchs, as well as early elections.