For Whom The Bells Toll in Sofia? 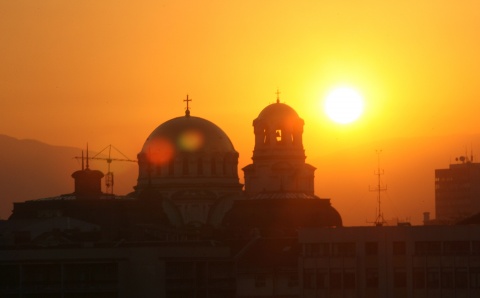 The story of Maria Zabova, bell ringer at Saint Alexander Nevsky Cathedral in Sofia, is a real epiphany, an inspiring tale of faith, commitment and strength.

On November 1, 2013 a theology student unexpectedly took her place at his own initiative and in a bid to call on the struggling nation to wake up. Only to draw the wrath of the church and get himself fired as an acolyte at the cathedral.

Milena Hristova takes a combo snapshot of the two. Sunday morning. The cathedral is cold and dark. It smells of incense. Maria Zabova starts to climb the narrow, winding ladder up to the bell tower. Two hundred and twenty stairs later, she is standing up upon the platform. The cold wind blows through the open arches. A last look at her watch. She stretches out her hands, grabs the ropes and pulls them with all her might. The dance of the bells begins.

The belfry is open on all sides and left to the mercy of the unsparing winds, which clash against the elderly woman's fragile body and play havoc with her hair. She looks like a captain, who is steering the ship along the road of righteousness. Friday morning. Bulgaria celebrates its National Enlighteners Day and pays tribute to its spiritual leaders, but there is no mass or bell ringing at Saint Alexander Nevsky Cathedral. Instead hundreds of protesting students, their supporters and opponents surround the temple.

Stanislav Vachin, a young man, a student in theology, decides to take things into his own hands, literally. Two hundred and twenty stairs later, he is standing up upon the platform. He stretches out his hands, grabs the ropes and pulls them with all his might. The dance of the bells begins. Unexpectedly, two minutes later the acolyte is fired and told never to return.

"The police had sealed off the whole area. Nobody could enter the cathedral. I thought it is my obligation as a man of the church to ring the bells and mark this holiday, despite the protests and despite the police,“ Stanislav Vachin says in justification of his act. "The church should be an example of high morality, values, obedience and patience. It should help the poor, unite people. And this is not what Bulgaria's church is doing now.”

Stanislav has been studying theology from 2005 – 2010. He comes from a religious family and says that his first years at Sofia Seminary were very difficult.

“I saw things that I have never thought I would see.  But I did not give up because everyone is responsible for his own acts.”

“I am a student, a citizen and a Christian, should I be punished for having a clear position? They make me feel as if I have committed a crime.”

Stanislav's only fear is that people are full of fear.

"I am not worried about my future. I am a good man and when I do something I do it good. Somehow  I will manage to find a job. Somehow I will find the right way to follow.

But I just can't stand passively and watch those gloomy faces.”

"My hope is that good times are ahead for Bulgaria. It is up to us to make this happen. If the young people are active and keep their eyes open, Bulgaria won't be the poorest country in the European Union. “ Maria Zabova too believes that now, more than twenty years after the collapse of the communist regime, there is a light at the end of the tunnel, but says that the years of dictatorship have exacted their toll.

"I have been recently struck by an epiphany of my own – I am convinced that Bulgarians will again turn to God one day, but this will be a very tough and long process. Three generations have been left crippled by the ban to enter churches."

Maria often reminisces about the past – but also looks ahead to the future.

"Sometimes I fall into despair when I think about today's young Bulgarians. They have so many opportunities to develop and make something big in their lives, but they don't seem to care. That's why I am really pleased to see young people coming into the church."

She is convinced that the difficulties only cemented her faith.

"I had a very rich and diverse life, despite the incredible obstacles that I faced. I always felt God next to me and he never failed me. I will never let him down either."

She is 84 years old and has been working as a teacher in mathematics all her life. A graduate of the French college Saint Joseph in the town of Plovdiv, she later studied higher mathematics and physics at Sofia University "Saint Kliment Ohridski". Contrary to widespread beliefs, she claims that higher mathematics, physics and the faith in God are completely compatible. "I believe my power is a gift from God. It is unusual for a woman at my age to have so much energy," says Maria Zabova, who has been bell ringer at Saint Alexander Nevsky Cathedral in Sofia, the biggest temple on the Balkans, for 30 years already.

The bells gave me great spiritual strength, which I feel to this very day – I enjoy excellent health, have achieved what I have wanted in life and am blessed with a wonderful family – my ten children, grandchildren and grand-grand children are all around me."

The cathedral was built to commemorate Bulgaria's liberation from Ottoman rule, while the twelve bells were cast in Tula, a large city near the Russian capital Moscow, on May 26, 1911, the date of Maria's birthday.

"I feel deeply moved by this coincidence," says Maria, her eyes glinting beneath her silvery hair.

Maria Zabova joined the choir of Saint Alexander Nevsky Cathedral in 1950 while she was a freshman at the university only to find that her close affinity to the church has stirred up a hornet's nest. The communist era was a period of great persecution for the religious people in Bulgaria, turbulent times when religion officially did not exist and the entry into churches was banned. "I faced unthinkable obstacles. I constantly lived with the fear that I will be punished or deported. The true communist is a Christian. Bulgaria was not ruled by communists, but by greedy and not that ethical members of the regime's nomenclature."

Of course all of this prompts the question how she found the strength to weather the turmoils, keep her faith and continue tacitly, like a true saint, to defend it.

"God showed me the way that I had to take and it was quite unexpected, even for me, that I fell in love with the bells. Our love keeps going strong for so many years, with no delays and excuses."