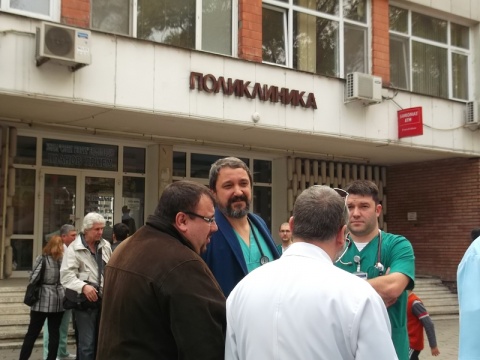 Medics across Bulgaria gathered to protest against budget cuts in healthcare. Photo by BGNES

The 2014 draft budget for the National Health Insurance Fund (NZOK) is worse than ever before, according to the Bulgarian Doctors Union.

The Chairman of the Doctors Union, Tsvetan Raychinov, stated that the medics will wait until Friday to see the response of the government on their demands, reports the daily Trud. After that, they will discuss their next steps, if the answer is unsatisfactory.

Last week, employees of several hospitals staged protest rallies against budget cuts in the NZOK. They are expected to be paid for only 80% of their activities by the end of the year.

"The medics demand that they get paid their full eligible sum, for both this year and the following one. We want to see the long-awaited healthcare reforms to get under way as well", commented Raychinov.

The union Chair also added that the Prime Minister and the Finance Minister had assured the doctors' demands will be met, but concrete actions are yet to be seen.