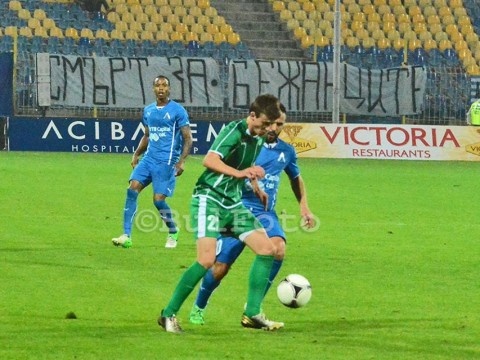 "Death to the refugees," one of the banners said. Photo by BulFoto

Bulgarian football giants Levski Sofia face a ban of at least BGN 25 000 after some of the team’s fans displayed xenophobic banners during a top division game on Sunday.

“Death to the refugees” and “Blood will be spilled over our lands”, the banners said during Levski’s home game against Pirin Gotse Delchev.

Margarita Ilieva, a representative of the Bulgarian Helsinki Committee, has told website Dnevnik.bg that the human rights NGO has approached Chief Prosecutor Sotir Tsatsarov over the outrageous display of xenophobia

It came a day after an Algerian immigrant allegedly stabbed a 20-year-old shopkeeper in Sofia.

The incident was followed by a wave of xenophobic discontent in the Balkan country, with extremist parties staging an anti-immigrant hate rally in Sofia on Sunday.

In its letter to the Chief Prosecutor, the Bulgarian Helsinki Committee has also alerted him about the hate speech of far-right party VMRO-BND, as well as several other marginal extremist formations.